Iranian forward Alireza Jahanbakhsh caught the attention of fans with an act of thoughtfulness while playing for his club Feyenoord against Elfsborg. 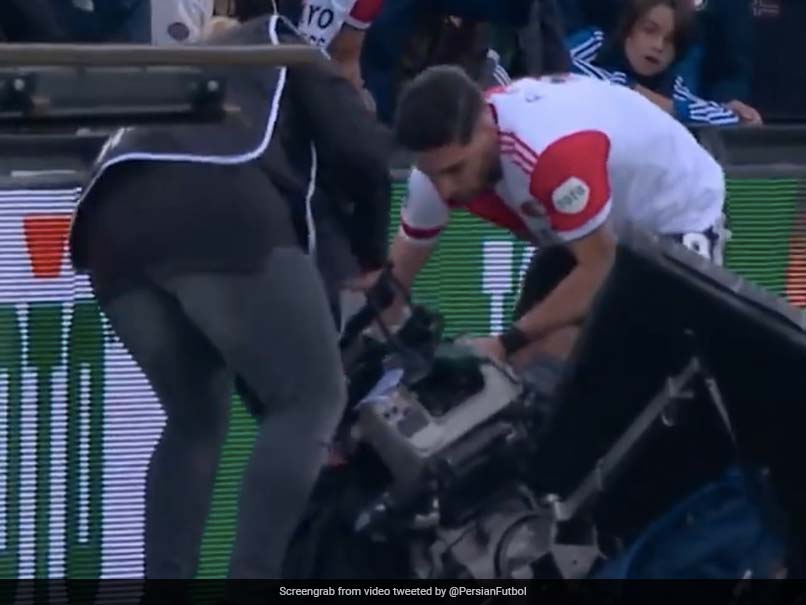 Alireza Jahanbakhsh came to the aid of the camerawoman after her cart was knocked down.© Twitter

Dutch football club Feyenoord were taking on Swedish side Elfsborg in the first leg of their Europa Conference League play-off on Thursday night when Iranian forward Alireza Jahanbakhsh caught the attention of fans with an act of thoughtfulness during the game. In the first half of the game in Europe's third-tier competition, Elfsborg defender Simon Strand was chasing the ball near the sidelines, with Jahanbakhsh just behind him, when the speed of his run saw him collide with the pitch-side camera cart and knock it down.

Jahanbakhsh seemed to chide Strand for his reckless run and then came to the aid of the cameraperson. After checking that she was fine, Jahanbakhsh helped the camerawoman get the set-up back up on the cart.

His teammate Marcus Holmgren Pedersen, a Norwegian right-back, also reached out to the camerawoman to make sure she was unhurt.

The video of the incident has since gone viral and Jahanbakhsh has received praise from internet users for his swift response. Watch the video here:

Alireza Jahanbakhsh is just class - on & off the field.

After an Elsborg player had knocked an @ESPN camera cart over, Alireza took the time to ensure the camerawoman was unhurt. He then proceeds to fix the cart.

This act of kindness has gone viral.pic.twitter.com/6cqaEvlLe0

Jahanbakhsh, who represented Iran at the 2014 and 2018 World Cups and previously played for Brighton in the Premier League, had signed for Feyenoord earlier this summer.

He also scored during Thursday's game against Elfsborg, netting a 30th minute goal to help set up a thumping 5-0 win for his side.

Thursday's victory helped Feyenoord inch closer to a spot in the group stages of the Europa Conference League, a competition that has been initiated by European football governing body UEFA from this season as a way of giving more continental games to clubs from lower-ranked nations.

The two teams will meet again in the second leg on Thursday.

Feyenoord IF Elfsborg Alireza Jahanbakhsh
Get the latest updates on India vs Australia and check out  Schedule, Results and Live Score. Like us on Facebook or follow us on Twitter for more sports updates. You can also download the NDTV Cricket app for Android or iOS.