It was an unconventional setting in which England's 18-year-old midfielder Jude Bellingham had his first-ever beer. 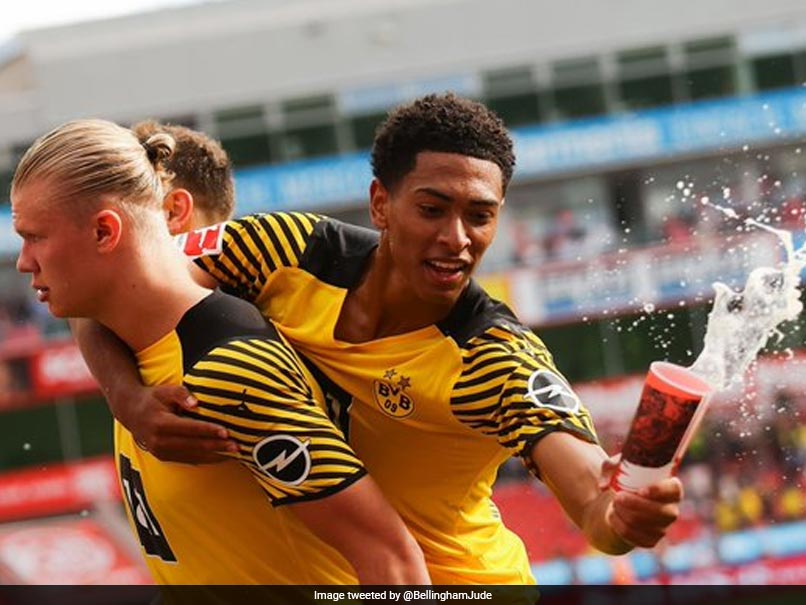 It was an unconventional setting in which England's 18-year-old midfielder Jude Bellingham had his first-ever beer. Playing for Borussia Dortmund in a Bundesliga game away at Bayer Leverkusen on Saturday, Bellingham had leapt onto the back of Norwegian teammate Erling Braut Haaland after the latter scored from the penalty spot for what turned out to be the winner in a seven-goal thriller. As the Dortmund players celebrated in front of the hostile home fans, they saw disposable glasses filled with beer being thrown at them.

Like an adept fielder in a cricket match, Bellingham expertly caught one of the glasses with his left hand and took a sip.

The youngster evidently didn't like the taste of beer and grimaced as he threw the glass away.

After the game, Bellingham playfully quote-tweeted a video of the incident with the caption: "Cheers."

He added in another tweet: "Perfect day for my first beer... Not a fan."

Perfect day for my first beer... Not a fan.#HejaBVB pic.twitter.com/DVs5v2tU0N

Dortmund, who are now third in the Bundesliga standings with nine points from four games, had gone behind early in the game after Florian Wirtz game Leverkusen the lead in the ninth minute.

Haaland equalised for Dortmund in the 37th minute but Patrik Schick restored Leverkusen's lead with a goal at the stroke of half-time.

Julian Brandt equalised for Dortmund four minutes into the second half but the hosts took the lead for the third time in the game when Moussa Diaby scored in the 55th minute.

Dortmund rallied and equalised again, this time through Raphael Guerreiro in the 71st minute, before Haaland scored the winner from a penalty in the 77th minute to secure a 4-3 victory.

Borussia Dortmund Jude Bellingham Erling Braut Haaland
Get the latest updates on IPL Auction 2023 and check out  IPL 2023 and Live Cricket Score. Like us on Facebook or follow us on Twitter for more sports updates. You can also download the NDTV Cricket app for Android or iOS.