Serie A: Lazio vs Napoli match seemed headed for a goalless draw but all that changed with eight minutes remaining. 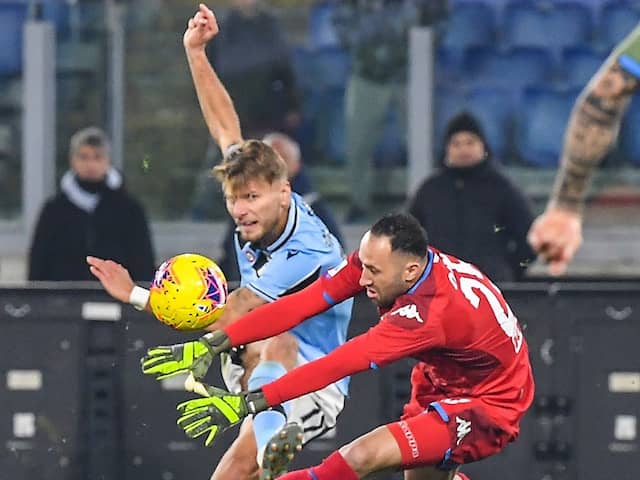 Former Arsenal goalkeeper David Ospina made a catastrophic error that cost his team Napoli dear and gifted Lazio a crucial 1-0 win in Serie A at the Stadio Olimpico on Saturday night. The win helped Lazio push their winning streak to a club record of 10 games as they inflicted a second consecutive defeat on Serie A runners-up Napoli. The match looked to be headed for a goalless draw but all that changed with eight minutes remaining when Colombian international David Ospina was caught in possession inside his own box.

Lazio's Ciro Immobile pounced to curl in his 20th league goal in 19 games to the delight of the home crowd as the club marked their 120th anniversary.

Here is Ospina's shocking mistake that gifted Lazio the win:

Lazio are chasing their first Scudetto since 2000.

"What is missing for the Scudetto? To be honest, we're not missing much," said coach Simone Inzaghi.

The win helped Lazio consolidate third place in Serie A, three points behind leaders Inter Milan and Juventus, as they chase their first Scudetto since 2000.

Napoli, who finished second behind Juventus in the Serie A last season, dropped to 10th place.

Meanwhile, Zlatan Ibrahimovic marked his first start back at AC Milan by scoring in a 2-0 win over Cagliari.

The 38-year-old Ibrahimovic had come on as a substitute in the goalless draw against Sampdoria last weekend, days after his return to Italy.

But he played the entire match in Sardinia scoring after 64 minutes for his first Milan goal since leaving the club for Paris Saint-Germain (PSG) eight years ago.

Ciro Immobile Football
Get the latest Cricket news, check out the India cricket schedule, Cricket live score . Like us on Facebook or follow us on Twitter for more sports updates. You can also download the NDTV Cricket app for Android or iOS.