Sebastiano Esposito put away a second-half penalty which made him the youngest Inter Milan scorer since Mario Corso in 1958. 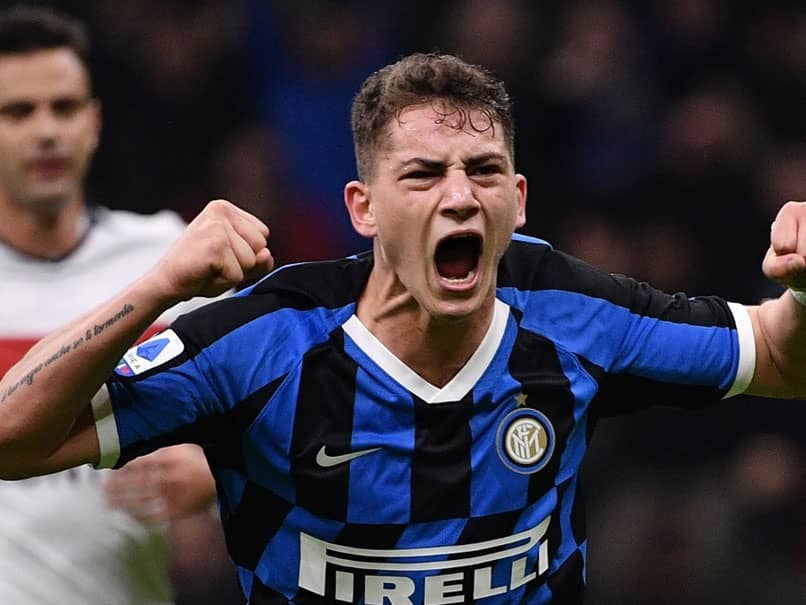 Sebastiano Esposito became Inter Milan's youngest scorer in more than 60 years on Saturday when he hit the target in a 4-0 romp against Genoa, helping his side return to the top of Serie A. The 17-year-old put away a second-half penalty which made him the youngest Inter scorer since Mario Corso in 1958. Romelu Lukaku scored twice with Roberto Gagliardini adding another as Inter moved level with champions Juventus at the top on 42 points. Juventus had taken top spot on Wednesday with a 2-1 win over Sampdoria before heading to Saudi Arabia where they face Lazio in the Italian Super Cup on Sunday.

However, Inter are now in pole position courtesy of goal difference.

"I just saw my mum in the stands and the goal is for her," a tearful Esposito, who is 17 years and 172 days old, told Sky Sport Italia.

"I didn't sleep at all last night (after he was told he would start the game). I spent the whole night thinking about what would happen today."

The teenager also hailed Lukaku who gave him the ball to take the penalty even though he could have finished the game with a hat-trick.

"Romelu is a fantastic person as well as being an extraordinary player. He told me, just go out there, make a decision and hit the ball."

Genoa, now without a Serie A win at Inter since 1994, end the year at the bottom of the table after a 10th defeat this season.

Lukaku opened the scoring after 31 minutes, heading in a cross from Antonio Candreva.

Within a minute it was 2-0 when Lukaku teed-up Gagliardini whose shot was deflected off Cristian Romero and into the goal.

Esposito added his name to the scoresheet from the spot in the 64th minute when Kevin Agudelo fouled Gagliardini.

Lukaku's gesture to his teenage teammate was rewarded when he hit a long-range drive which went in off the underside of the crossbar for his second of the night and his team's fourth seven minutes later.

"I saw him in pre-season training and he just looked like a little child, even his face seems so young," said Inter coach Antonio Conte of Esposito.

"He has really grown in the last couple of months and he has a great future ahead of him."

Cagliari suffered their first away defeat of the season, losing 2-1 at Udinese as their Champions League hopes suffered a blow.

Rolando Maran's side have now won just once in their last five games, claiming only a single point in their three most recent outings.

SPAL claimed their first league win in two months when they edged Torino 2-1, a victory which allowed them to move off the bottom of Serie A and into 19th spot.

Earlier on Saturday, Fiorentina fired coach Vincenzo Montella with the club struggling in 15th in Serie A.

Montella, a 45-year-old former Italy winger, managed Fiorentina from 2012-15 leading the club to two fourth-place finishes in Serie A before he was fired.

After spells in charge at Sampdoria, AC Milan and Sevilla, he returned to Florence in April.

However, Fiorentina lost 4-1 at home to Roma on Friday and have taken just two points from their last seven games.