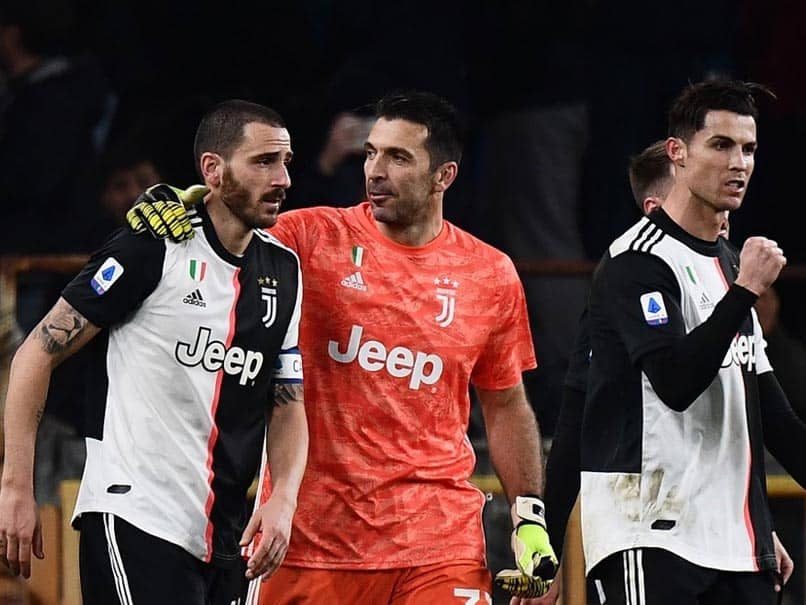 Cristiano Ronaldo continued his hot streak as his towering header gave Juventus a 2-1 win at Sampdoria to put Juventus top of the table as Gianluigi Buffon equalled Paolo Maldini's Serie A appearance record. Cristiano Ronaldo met Alex Sandro's looping cross with an incredible leap and header just before half-time to put Juventus on 42 points, three ahead of Inter Milan ahead of their match with struggling Genoa on Saturday. "I'm really happy with the result... It was a really good goal also because it was the one that won the three points," said Ronaldo, who earlier in the season was off-form amid injury concerns.

"Like I said before I'd had pain in my knee for around a month, but now I'm OK and now I want to help Juventus win trophies."

The Argentine met Alex Sandro's raking cross in the 19th minute with the most delicate of volleys, caressing the ball past Emil Audero from the edge of the box.

Maurizio Sarri's side had so much of the ball they already looked home and dry but they failed to capitalise on their possession and were punished by Gianluca Caprari 10 minutes before the break, the Italian pouncing after Sandro was caught on the ball to crash his finish past Buffon.

However Ronaldo soon sparked into action, first fizzing in a cross that both Gonzalo Higuain and Dybala just only just failed to get contact on.

The Portugal forward then put the away side back in front in the final minute of the half with his sixth goal in five matches in all competitions, a hanging header from another pinpoint Sandro cross.

The 34-year-old twice came close to a second in the dying seconds, first when he was ruled to be in an offside position after latching on to Aaron Ramsey's through ball and tapping past an onrushing Audero.

He then flashed a curling shot just wide in added time as Juve closed out what was a tight match against Claudio Ranieri's side, who sit just two points above the relegation zone.

The win, gained early in the week ahead of Sunday's Italian Super Cup clash with Lazio in Riyadh, was a further source of happiness for Buffon, who made his 647th Serie A appearance in place of the injured Wojciech Szczesny.

Buffon began his professional career as a teenager in 1995 at Parma, where he won the UEFA Cup and Coppa Italia in 1999 before moving to Juve two years later.

He has won nine Serie A titles and the Coppa Italia four times in Turin but has failed to conquer Europe despite reaching two Champions League finals under previous coach Massimiliano Allegri.

However he will have another chance at winning Europe's top club competition after returning to Juve in the summer following a disappointing season at Paris Saint-Germain.

His team cruised into the last 16 after qualifying from Group D unbeaten, six points ahead of second-placed Atletico Madrid.

The former Italy captain also holds the appearance record for his national team, with 176 caps between 1997-2018, winning the 2006 World Cup.

Later on Wednesday, Brescia missed out on a chance to escape the relegation zone when they lost 2-0 at home to Sassuolo.

The game was a rescheduled week seven fixture that was postponed following the death of Sassuolo president Giorgio Squinzi.

Inter Milan Football
Get the latest updates on India vs England Series, India vs England , live score and IPL 2021 Auction . Like us on Facebook or follow us on Twitter for more sports updates. You can also download the NDTV Cricket app for Android or iOS.