Cristiano Ronaldo enjoys great fanfare, but he was left miffed by a fan who tried to grab him for a selfie on the pitch. 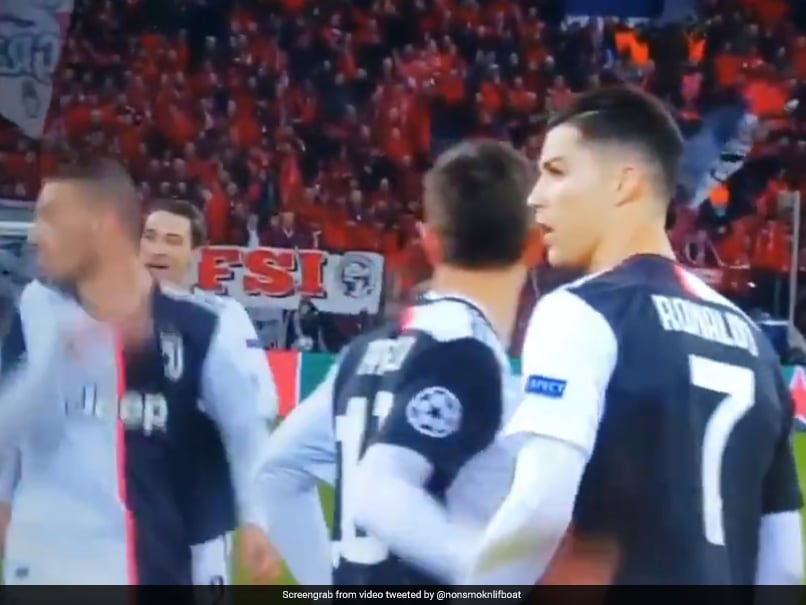 Cristiano Ronaldo was not happy at the pitch invaders attempted selfie.© Twitter

Cristiano Ronaldo scored his second Champions League goal of the season as Juventus recorded a 2-0 away win over Bayer Leverkusen in their final group stage match, but he was left flustered after being confronted by two pitch invaders. The first one came on to the pitch and hugged Ronaldo, and when a second one ran on to the pitch moments later and tried to grab him for a selfie, the Juventus forward pushed him away before angrily gesturing at him as security staff took him away.

Ronaldo holds the back of his neck, seemingly hurt during the fan's attempt at getting a picture clicked with him, and is finally calmed down by teammate Gianluigi Buffon.

Watch the video of Ronaldo's reaction to the pitch invader here:

Ronaldo to a fan: Are you crazy? #Juventus pic.twitter.com/VcPsaVX7e4

The match at the BayArena looked like it was headed for a draw when Ronaldo tapped in from close range to give Juventus the lead. Argentine forward Gonzalo Higuain sealed the win with a goal in the 90th minute as substitute Paulo Dybala picked up two assists in the match.

"I feel good, the annoyance I felt has passed and the team is in good shape," Ronaldo was quoted as saying after the match by news agency AFP.

"Today we played a good second half. We are all growing and even I personally felt better today, more confident and I hope to continue like this," the star forward said.

Atletico Madrid also qualified from their group, winning their final game 2-0 against Lokomotiv Moscow at home.

Juventus Football
Get the latest updates on ICC Women's Cricket World Cup 2022 and IPL 2022, check out the Schedule , Live Score and IPL Points Table. Like us on Facebook or follow us on Twitter for more sports updates. You can also download the NDTV Cricket app for Android or iOS.