Watch: A.S. Roma Manager Jose Mourinho Hilariously Tries To Give Instructions After Being Sent Off vs Napoli In Serie A

Serie A: A.S. Roma manager Jose Mourinho hilariously tried to give instructions to his team by climbing barricades after getting sent off during an Italian League game vs Napoli. 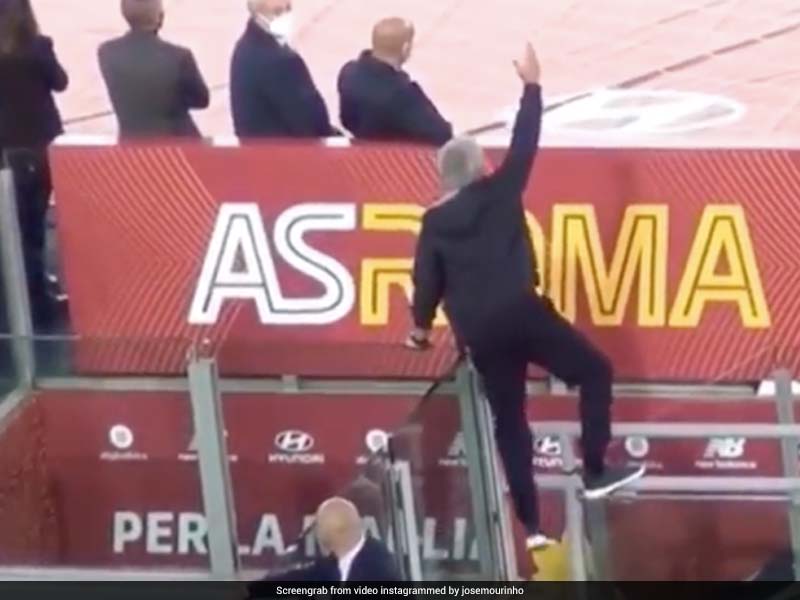 Jose Mourinho climbed up the barricades and gave instructions to his team A.S. Roma.© Instagram

Jose Mourinho was seen managing his team A.S. Roma in the most hilarious manner after getting sent off during a Seire A clash vs Napoli on Sunday. At the Stadio Olimpico, Mourinho received a yellow card in each half from the referee for showing dissent and was resultantly sent off. As the Roma boss went back to the stands, he received a big standing ovation from the Roma fans. However, the red card didn't seem to dampen Mourinho's spirit, he was later seen climbing barricades and giving instructions to his team players in a way never seen before.

Mourinho saw the lighter side of events that took place during his team's 0-0 draw against Napoli. He shared the video on his Instagram profile and wrote:

"When you have no ticket and you desperately want to watch a great football game."

Roma endured another tough outing as they enjoyed only 37 percent possession. Napoli, however, failed to take advantage of the chaotic events and couldn't convert any of their three shots on target.

Mourinho was heavily criticised after his side's 6-1 defeat at the hands of Norwegian club FK Bodo/Glimt in the Europa Conference League recently.

This was the second time Mourinho had seen red while managing Roma. He was sent off in a pre-season friendly against Spanish side Real Betis in August this season.

Napoli Football
Get the latest updates on Fifa Worldcup 2022 and check out  Fifa World Cup Schedule, Stats and Live Cricket Score. Like us on Facebook or follow us on Twitter for more sports updates. You can also download the NDTV Cricket app for Android or iOS.