Watch: Players Lost In "Ghost Goal" Celebration, End Up Conceding At The Other End

Hajduk Split, riding on lack of attentiveness of Slaven Belupo players who were celebrating, scored in the 74th minute to seal the game 2-0. 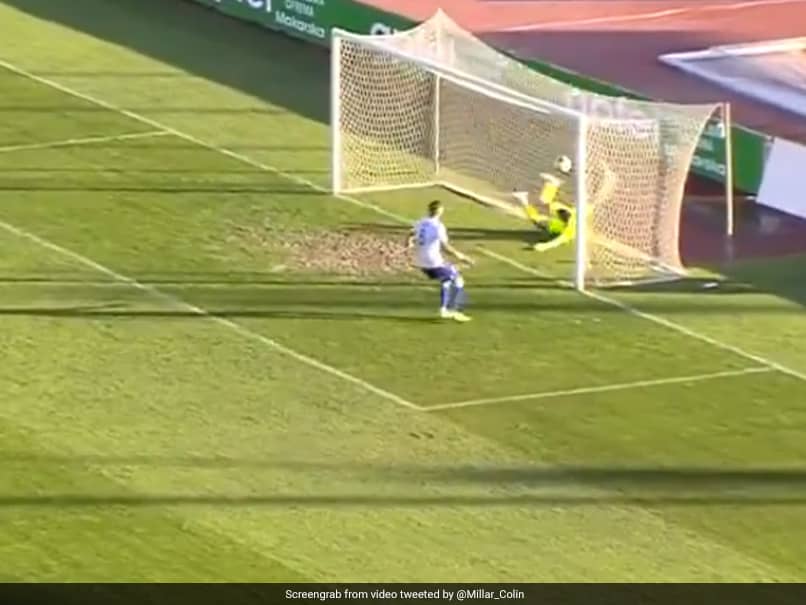 Optical illusion is a concept which forces one to believe something which hasn't actually happened. During a Croatian Cup match between Slaven Belupo and Hajduk Split, the visiting Belupo players started celebrating a non-existent goal, allowing the opposition to launch a counter-attack and double their lead. The video of the incident has gone viral since and many have termed it as a "ghost goal" after they failed to spot what transpired in the first attempt. Hajduk Split, riding on opposition's lack of attentiveness, scored in the 74th minute to seal the game 2-0.

The move began after Split's goalkeeper tried to throw the ball towards his player quickly after collecting it but ended up giving it straight to the opposition player who fired in a shot from the distance to beat the keeper.

The ball appeared to have crossed the goal line but in reality it had come off the post. Thinking that they have scored the equaliser, Belupo players started celebrating in the middle, while their goalkeeper rushed towards the touchline halfway down the field to celebrate with his manager and players sitting on the bench.

The referee allowed the game to carry on and Split's players launched a counter-attack and scored an easy goal by putting the ball it in a vacant goalpost.

In the first half, Hajduk Split opened the scoring through a Jairo de Macedo da Silva's strike in the 14th minute. The hosts kept their lead intact going into the half-time break. The hosts doubled their lead in the second half with 16 minutes left on the clock, sealing the match in their favour.

This was Hajduk Split's eighth win from 13 games and they are currently on second place in the points table, only a point behind leaders Dinamo Zagreb, while Slaven Belupo are the bottom of the table with just 10 points from 13 matches.

Comments
Topics mentioned in this article
Dinamo Zagreb Hajduk Split Football
Get the latest updates on India vs England Series, India vs England , live score and IPL 2021 Auction . Like us on Facebook or follow us on Twitter for more sports updates. You can also download the NDTV Cricket app for Android or iOS.