Non-league Chorley knocked coronavirus-ravaged Derby County out of the FA Cup with a surprise 2-0 win on Saturday, while Everton survived a scare against Rotherham as the spiking pandemic took its toll on the third round. 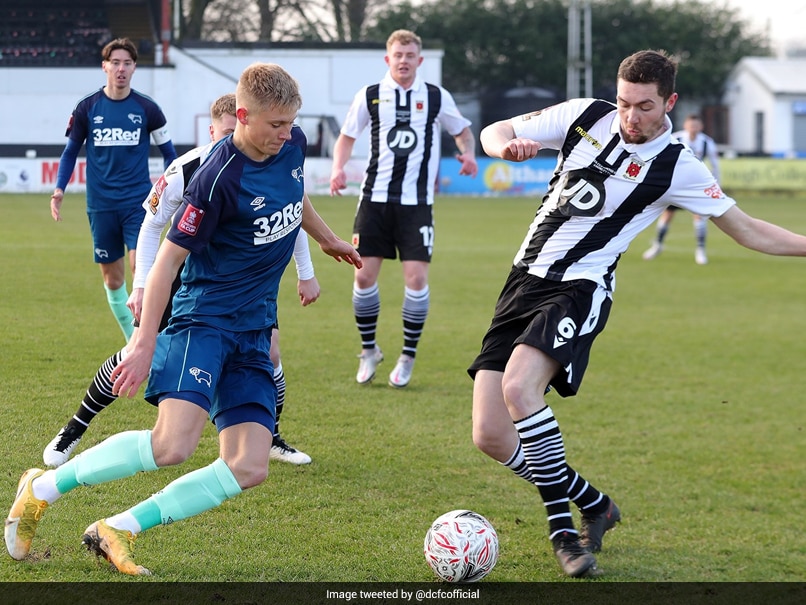 Derby County first-team squad were ruled out following a virus outbreak at the Championship club.© Twitter

Non-league Chorley knocked coronavirus-ravaged Derby County out of the FA Cupwith a surprise 2-0 win on Saturday, while Everton survived a scare against Rotherham as the spiking pandemic took its toll on the third round. Derby were forced to play with only Under-23 and Under-18 players after their first-team squad and interim manager Wayne Rooney were ruled out following a virus outbreak at the Championship club. Chorley, from the sixth tier National League North, took advantage of Derby's weakened line-up, all making their debuts and with an average of 19, to reach the fourth round for the first time. It was Chorley's third league scalp in the FA Cup this season after previous wins against Wigan and Peterborough.

In freezing conditions, with snow cleared off the pitch before kick-off, Chorley went ahead after 10 minutes when Derby failed to clear a long throw and Connor Hall nodded over the line.

Chorley's modest Victory Park ground is so homely that one fan was able to watch from over their back garden fence, while two others used a cherry picker crane to get a glimpse of the action.

Those enterprising fans saw Chorley's Mike Calveley seal their side's memorable success when he poked home from close-range in the 84th minute.

The cup upset was a welcome boost for Chorley manager Jamie Vermiglio, whose job as a primary school headteacher has been thrown into chaos by the current national lockdown in Britain.

"It's a very proud moment for us. Credit to our boys, they've been on a journey and we said it before the game, the journey can continue today and it has done," Vermiglio said.

There are growing concerns over whether the English season should be halted as the new Covid-19 variant wreaks havoc.

Liverpool beat virus-plagued Aston Villa 4-1 in the FA Cup third round on Friday, with their opponents missing the entire first-team squad and boss Dean Smith due to a Covid outbreak.

Southampton's third round tie against Shrewsbury on Sunday has been postponed after several positive tests at the League One team.

A record-high 40 positive tests were detected among top-flight players and staff in the week between December 28 and January 3 and four Premier League games have already been postponed this term.

The English Football League, which oversees the three divisions below the Premier League, reported 112 positive tests on Friday.

Newcastle boss Steve Bruce and Leeds manager Marcelo Bielsa claim there is a moral argument to suspend all matches with the UK death toll from the virus reaching a new high this week with 1,325 deaths reported on Friday alone.

On Saturday at 1100 GMT the total number of fatalities caused by coronavirus in the United Kingdom stood at 79,833, the highest toll in Europe.

For now, the FA Cup action goes on and Everton needed extra time to see off second tier Rotherham 2-1 at Goodison Park.

Everton manager Carlo Ancelotti made eight changes and Turkish striker Cenk Tosun, making his first start in over a year, scored his first Toffees goal since November 2019 in the ninth minute.

Matthew Olosunde equalised for Rotherham in the 56th minute when he fired home after pouncing on Tom Davies' weak header.

National League side Boreham Wood, playing in the third round for the first time, were beaten 2-0 by 2004 FA Cup finalists Millwall.

Everton Football
Get the latest updates on India vs South Africa and check out  Schedule, Results and Live Score. Like us on Facebook or follow us on Twitter for more sports updates. You can also download the NDTV Cricket app for Android or iOS.