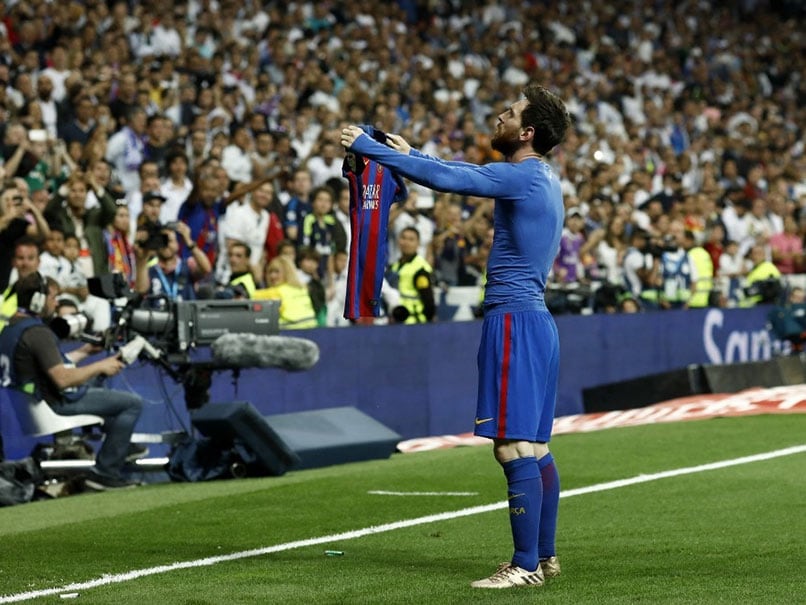 Lionel Messi's celebration after a late winner against Real Madrid is one of his most iconic moments.© AFP

Lionel Messi, one of the greatest footballers of the modern era, will no longer be wearing the FC Barcelona jersey. On Thursday, the club said that despite Barcelona and Messi reaching an agreement and showing a clear intention of signing a new contract, the deal couldn't go through because of "financial and structural obstacles". The club also said that the new contract couldn't be signed due to the Spanish Liga regulations. "As a result of this situation, Messi shall not be staying on at FC Barcelona. Both parties deeply regret that the wishes of the player and the club will ultimately not be fulfilled," Barcelona said in a statement.

The football world is now speculating where the Argentine magician is next headed. However, no matter where Messi goes, Barcelona will remain special for all the iconic moments he created for fans around the world. The talismanic forward won 10 La Liga titles, four Champions Leagues and six European Golden Shoe awards with the Catalan outfit.

It's impossible to list out all of them, but here are 10 moments that Barcelona fans will never forget:

The six-time Ballon d'Or winner produced a once-in-a-lifetime performance, scoring a staggering 91 goals for the club and 29 assists during the 2012-13 season.

2) That goal against Getafe:

Yes, that's how Barcelona fans recall the 2006-07 Copa del Rey match in which a 19-year-old Messi went past five players and put the ball in the back of the net. It was after this goal that many started drawing parallels between Messi and the great Diego Maradona.

The firsts are always special. Even though Lionel Messi won many El Clasicos for Barcelona, his hat-trick against arch-rivals Real Madrid in 2007 stands out and remains fresh in the minds of his fans. It was Messi's first career hat-trick.

Following his heroics in La Liga, where he finished as the top goalscorer in 2019, Lionel Messi won a record sixth Ballon d'Or, going ahead of Cristiano Ronaldo, who has won the award five times. Many see him as the top contender even this year, especially after Argentina lifted the Copa America under Messi's captaincy.

Pulling off a spectacular performance in the second leg of the 2010 Champions League quarter-finals, Lionel Messi scored all 4 goals in Barcelona's 4-1 victory over Arsene Wenger's Arsenal.

What better than breaking the goal-scoring record of one of the greatest players to have played the game, right? With his 644th strike in 2020, the brilliant Lionel Messi broke Pele's record of most goals for a single club. Pele scored 643 goals for Santos between 1956 and 1974.

One of, perhaps, the most iconic pictures of all time in football is that of Lionel Messi standing holding his jersey high at the Santiago Bernabeu. The stoppage-time winner took Barcelona to the top of La Liga table.

Pep Guardiola's Barcelona were facing Sir Alex Ferguson's Manchester United in the final of the 2011 Champions League at Wembley. Having lost the 2009 final against the same opponents, United were keen on avenging their defeat. But Messi had other ideas, scoring a goal and producing a man of the match performance in his team's 3-1 victory.

In 2011, Real Madrid were once again at the receiving end of Lionel Messi's brilliance. The left-footed legend went past Madrid's defence in the 76th minute to score a memorable goal.

Yes, Lionel Messi is the only player to have scored five goals in a single Champion League match. He achieved the feat against Bayer Leverkusen, scoring a brace before half-time and then netting thrice in the second half, in 2015.