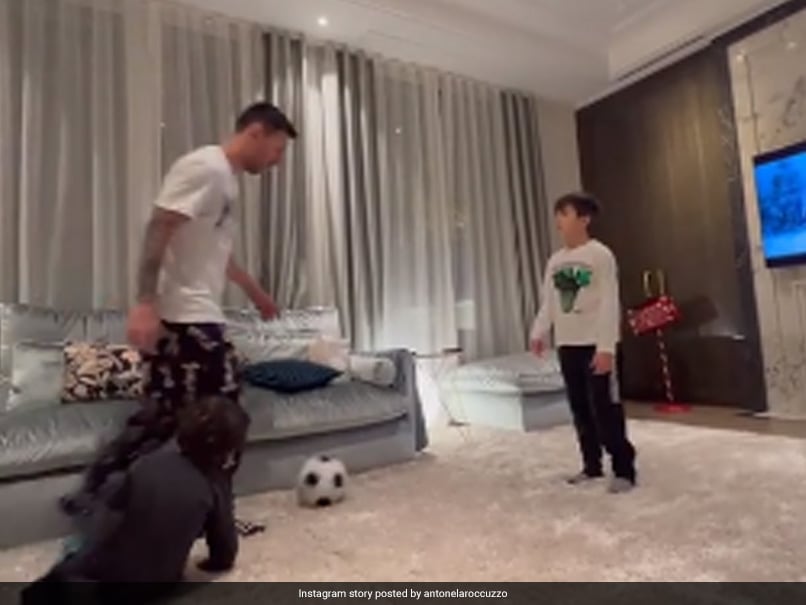 Lionel Messi plays football with his kids at home.© Instagram

Having recently won his seventh Ballon d'Or, Lionel Messi decided to have a kickabout with his children in his living room. His wife, Antonela Roccuzzo posted an Instagram story of him playing with his sons; Thiago (9), Mateo (6) and Ciro (3). The video starts with the PSG attacker running rings around Ciro, who tries his best to wipe out his father. In the latter part of the video, Messi can be seen goalkeeping with his sons fighting for the ball. The video reached its climax when Mateo decided to completely wipe out Ciro with a brutal sliding tackle. After the tackle, Mateo didn't show any sympathy with Ciro making his way to the sidelines. Here is the video:

Ronaldo finished in sixth position, with Karim Benzema coming in fourth and N'Golo Kante in fifth.

Having joined PSG during the summer transfer window, Messi has appeared 14 times for the Ligue 1 outfit, scoring six goals.

Messi featured in PSG's recent UEFA Champions League Group A match against Club Brugge. The Parisian outfit sealed a 4-1 win with Messi and Kylian Mbappe scoring a brace. PSG have qualified for the Round of 16 stage in the Champions League.