La Liga: Sevilla goalkeeper Yassine Bounou scored an accurate left-footed equaliser against Real Valladolid and helped his side stay in the title race. 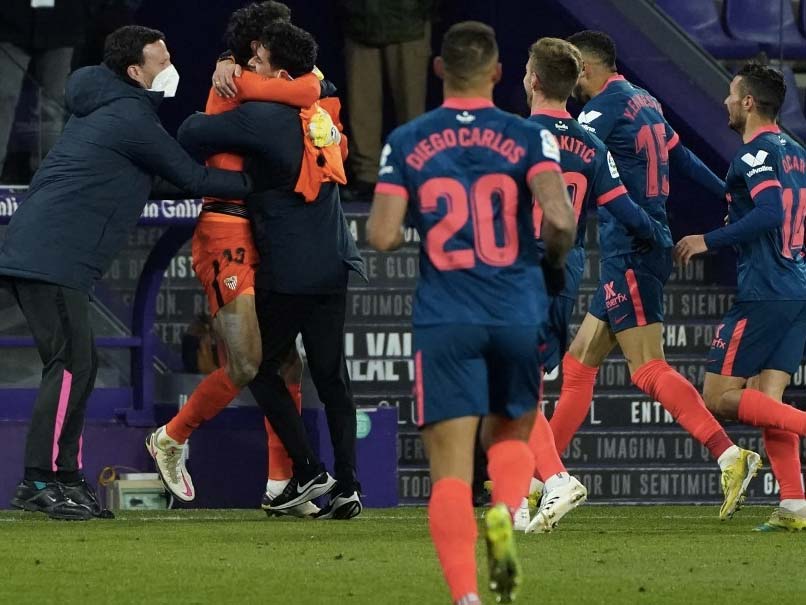 Sevilla goalkeeper Yassine Bounou scored a stunning equaliser in injury time against Real Valladolid, in a 1-1 draw at the Jose Zorrilla Stadium, on Saturday. Trailing by a goal, the Moroccan goalkeeper came up with the goods in the fourth minute of injury time, when his team received a corner kick. The corner kick failed to find a header, but some abysmal defending from Valladolid allowed opposition players to desperately hit the ball around the box, with Bounou finally finding the bottom-left corner with a left-footed finish. After scoring the goal, the goalkeeper took his shirt off and ran away to celebrate, with his teammates behind him. Here is the video:

The draw helped Sevilla stay in the La Liga title race, with 55 points. Atletico Madrid are currently on top of the table with 63 points, followed by Real Madrid and Barcelona in second and third places respectively.

The La Liga title race has been a tight one this season, with the four clubs challenging for the top spot. Earlier, Atletico Madrid had taken a healthy lead but a string of poor performances lately has cast some serious doubts over their title ambitions.

Meanwhile, another goalkeeper found himself on the scorers' sheet in Portugal on the same day, in the Liga Pro. Varzim SC defeated CD Mafra in a 2-0 victory, with goalkeeper Ricardo Nunes scoring spectacularly from his own box in the 53rd minute.

Sevilla Yassine Bounou Football
Get the latest updates on SA vs IND 2021-22, check out the Schedule and Live Score . Like us on Facebook or follow us on Twitter for more sports updates. You can also download the NDTV Cricket app for Android or iOS.