Eden Hazard scored his first goal for Real Madrid in over a year and his team appear to turn a corner as they beat newly-promoted Huesca 4-1 in La Liga on Saturday. 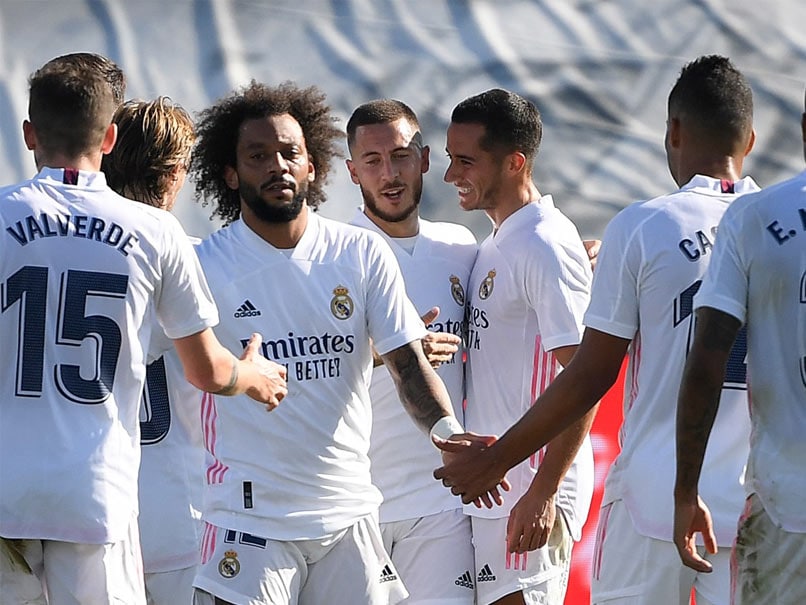 Eden Hazard scored his first goal for Real Madridin over a year and his team appear to turn a corner as they beat newly-promoted Huesca 4-1 in La Liga on Saturday.  Hazard has had a terrible time with injuries since joining Madrid for 100 million euros ($113 million) from Chelsea in 2019 but the Belgian will hope his stunning strike from distance at the Alfredo di Stefano can kick-start his career in Spain.

Karim Benzema and Fede Valverde made the win secure before Huesca scored through David Ferreiro, only for Benzema to add his second and Madrid's fourth in injury-time.

Zinedine Zidane's side jump above Real Sociedad to the top of the table to cap an encouraging week, which began with a Clasico win over Barcelona at Camp Nou and finishes with them moving nine points clear of the Catalans, who play away at Alaves later on Saturday.

In between, Madrid came too close for comfort to another damaging defeat in the Champions Leaguebut two late goals salvaged a draw at Borussia Monchengladbach that in the end felt like a win.

Huesca, who are yet to win this season, might feel the scoreline was harsh after they squandered early chances.

Madrid will hope the dip that put Zidane under pressure earlier this month is over.

Zidane will have been particularly delighted with Hazard, whose goal was his first for Madrid since he scored against Granada in October last year, and his second overall in La Liga.

Ankle surgery kept Hazard out for the majority of last season and he was not fit for the start of this one, with Madrid only describing his latest setback as a "muscle injury".

But he made his first appearance off the bench in the Champions League in midweek and against Huesca  marked his first start with a brilliant goal in the first half.

Until then, Huesca had been the better team but Hazard's strike turned the contest in the 40th minute, when he received the ball on the half-turn and swerved a superb shot into the corner from 30 yards out.

Benzema made it two, chesting down Lucas Vazquez's cross at the back post and driving in, before Valverde struck a sweet half-volley into the corner.

Ferreiro gave Huesca brief hope with 16 minutes left but Madrid were never overly troubled and Benzema rounded off the win in injury-time, converting a smart header back from Rodrygo.

Karim Benzema Football Zinedine Zidane
Get the latest updates on IPL Auction 2023 and check out  IPL 2023 and Live Cricket Score. Like us on Facebook or follow us on Twitter for more sports updates. You can also download the NDTV Cricket app for Android or iOS.