Champions League: Having slumped to a 3-1 defeat away to Lazio in their opening game last week, Borussia Dortmund were under pressure to pick up three points. 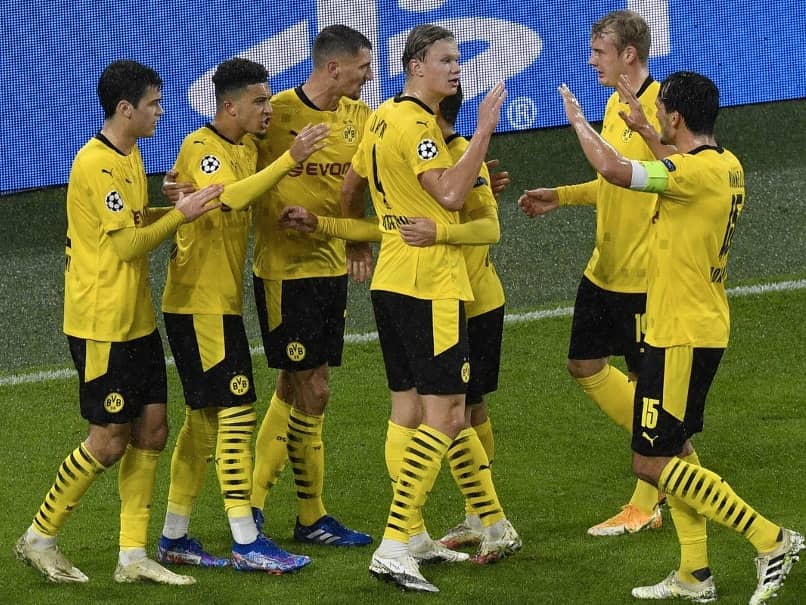 Jadon Sancho and Erling Braut Haaland spared Borussia Dortmund's blushes with late goals on Wednesday, as the German side laboured to a 2-0 victory over Zenit St. Petersburg in the Champions League in a game even their boss admitted "won't go down in the history books". Sancho's 77th-minute spot-kick and a stoppage-time strike from Haaland decided an otherwise turgid game in Dortmund's favour, giving them the first three points of their Group F campaign. "It was difficult today. We had the ball a lot and we had to be patient and not rush things," Haaland told Sky.

"We knew the chances would come, and in the end it is three very important points," he added.

Having slumped to a 3-1 defeat away to Lazio in their opening game last week, the Bundesliga side were under pressure to pick up three points.

"After the Lazio game, we needed to win, and you could see there was some pressure. It's a big relief," Dortmund sporting director Michael Zorc told Sky, adding that the game "won't go down in the history books".

Having played recent games in front of several hundred fans, Dortmund were forced to close their stadium doors completely on Wednesday following a decision by local and regional health authorities the day before in the light of growing numbers of coronavirus cases.

As the sound of heavy rain echoed around the 80,000-capacity arena, Lucien Favre's side toiled without reward against a well-drilled Russian defence.

With Zenit content to sit back, Dortmund were starved of space up front and their attacks repeatedly fizzled out in a tangle of short passes.

"Guys, this is too complicated," shouted veteran centre-back Mats Hummels into the empty Signal-Iduna-Park midway through the first half.

Sancho orchestrated a couple of half-chances before the break, but neither Marco Reus nor Haaland could squeeze the ball past Mikhail Kerzhakov.

Reus struck the post early in the second half, while Kerzhakov palmed away a long-range effort from Dahoud on 66 minutes.

The home side were finally rewarded 11 minutes later as Thorgan Hazard was pulled down by Vyacheslav Karavaev.

Sancho, who has faced media criticism for his recent performances, made no mistake from 12 yards, coolly slotting the ball into the bottom corner in front of the famous, but now deserted 'Yellow Wall'.

Haaland sealed the three points in stoppage time, latching onto a flicked header from Jude Bellingham and drilling the ball underneath Kerzhakov.

Zenit St. Petersburg Jadon Sancho Erling Braut Haaland Football
Get the latest updates on India vs Australia Series, check out the India vs Australia Schedule for 2020-21 and Ind vs Aus live score . Like us on Facebook or follow us on Twitter for more sports updates. You can also download the NDTV Cricket app for Android or iOS.