David Beckham played for the Galaxy until 2012, taking league titles in his final two campaigns. 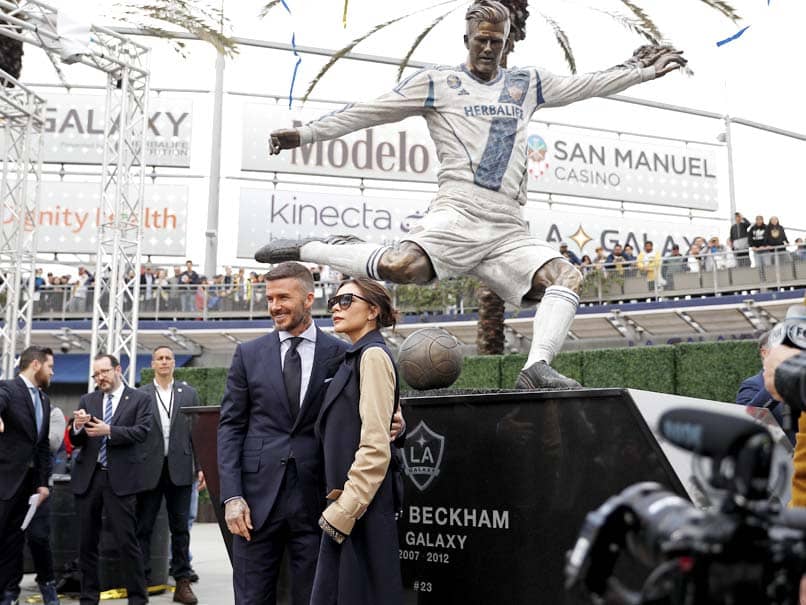 David Beckham attended the ceremony with his wife Victoria.© AFP

Major League Soccer kicked off a new season on Saturday with 10 games and a tribute to football great David Beckham whose arrival in 2007 helped usher in a new era for the then upstart league. A statue of the former England captain was unveiled by the LA Galaxy outside their stadium in an emotional ceremony prior to their 2-1 victory over the Chicago Fire. Beckham's former Galaxy coach Bruce Arena and teammate Robbie Keane, as well as Beckham's wife, Victoria, attended the ceremony.

"From day one when myself, Victoria, and the kids arrived in this city we felt at home and for that we will be forever grateful," said Beckham, who is set to become an MLS club owner when expansion side Inter Miami joins the league.

"This city has always felt like home for me. My wife, my kids, my parents, and my friends, I couldn't have had the career I had without the support from you guys."

Beckham made headlines around the world when he moved to the United States in 2007 after an illustrious career at Manchester United and Real Madrid.

His Galaxy deal was widely reported to be for USD 250 million over five years, but in reality the USD 250 million figure was his potential earnings from salary, endorsements and club revenue. His base salary was USD 6.5 million a year but he was promised a percentage of Galaxy revenues.

Beckham played for the Galaxy until 2012, taking league titles in his final two campaigns, during a career that also featured a stop with England's national team.

"He wasn't one of the fastest players on the field, nor did he score many goals," Arena said.

"He was an outstanding passer and a great free-kick specialist.

"He was an intelligent and skillful player. He was simply a great leader and a winner."

Said former Los Angeles Lakers star Kobe Bryant, "the impact he had on the sport here in America can't be overstated. He was the first true big name to come to the States."

Beckham helped pave the way for European star players to follow and so it was fitting that Zlatan Ibrahimovic scored on a late header Saturday to lift the Galaxy to a season-opening win over the Fire.

Ibrahimovic, who was second in MLS last season with 22 goals in his debut campaign, rushed in to put his header past Fire goalkeeper David Ousted in the 80th minute.

"We are not 100 percent but we worked to get our first three points," said Ibrahimovic.

Elsewhere, Toronto FC captain Michael Bradley's brace lifted the Canadian side to a 3-1 victory at Philadelphia in the opening game of the season.

The 31-year-old US midfielder found the goal three minutes into first half stoppage time and again in the 62nd to put Toronto on top.

Opening day also featured the debut of expansion squad FC Cincinnati, who lost their inaugural game 4-1 to the Seattle Sounders.

It is the second straight season that Seattle has hosted an expansion team in the season opener. Last year they faced Los Angeles FC and suffered a 1-0 loss.

There was no repeat performance as Cincinnati were no match for the Sounders.

MLS Cup champions Atlanta, with a new manager and without star Miguel Almiron who decamped to Newcastle United in January, open their campaign on Sunday against Wayne Rooney and DC United.

Comments
Topics mentioned in this article
David Beckham Football Victoria Beckham
Get the latest updates on IPL 2021, IPL Points Table , IPL Schedule 2021 , live score . Like us on Facebook or follow us on Twitter for more sports updates. You can also download the NDTV Cricket app for Android or iOS.