The win takes the Highlanders to the third spot in the Indian Super League (ISL) 2018-19 table. 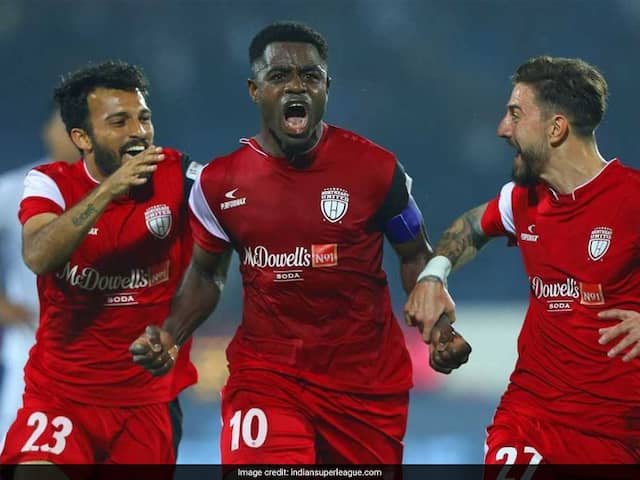 NorthEast United FC defeated Chennaiyin FC 1-0 by a slender margin at the Indira Gandhi Athletic Stadium in Guwahati, courtesy of a late screamer from Bartholomew Ogbeche. NorthEast United dominated the match to create a flurry of chances, but eventually needed a moment of brilliance from their star striker to secure all three points. The win takes the Highlanders to the third spot in the Indian Super League (ISL) 2018-19 table with 23 points from 13 matches. Chennaiyin, meanwhile, remained on the bottom spot with 5 points from their 13 outings.

Chennaiyin head coach John Gregory decided to hand a start to both his new recruits - CK Vineeth and Halicharan Narzary. His counterpart Eelco Schattorie, on the other hand, fielded a very familiar starting XI, barring the inclusion of goalkeeper TP Rehenesh.

After an edgy start, the first real action of the match came about on the 7th minute after Raphael Augusto weaved his way inside the box and got off a shot at goal. The Highlanders' defence managed to put in a last-ditch block to deflect the effort wide of the goal.

The home team, on the other hand, were having little joy with their forward forays. However, on the 18th minute, NorthEast had a big penalty appeal turned down. Chennaiyin's Germanpreet Singh's late challenge seemed to have caught Federico Gallego inside the box, but the referee waved off the frantic appeals for a spot kick.

The incident sparked a positive response from the Highlanders, as they created a number of decent chances in the following minutes.

Ogbeche saw his vicious shot from the edge of the box blocked, while Gallego brushed the crossbar from close range after creating a favourable position for a shot.

Rowllin Borges, too, couldn't capitalise on a lovely cross by Lalthathanga Khawlhring. The midfielder failed to get a telling touch with his header to redirect the ball into the net.

The score at half-time remained 0-0.

The second-half began on a similar note. However, the Highlanders carved out some big chances just after the 70-minute mark.

Chennaiyin goalkeeper Karanjit Singh's attempt to punch away a high cross fell kindly for Redeem Tlang inside the box. The NorthEast footballer's shot took a deflection and seemed goal-bound, but Tondonba Singh was at the right place at the right time to affect a goal-line clearance.

A flurry of chances followed, but some desperate defending by the Chennaiyin defence and a couple of good saves by Karanjit kept the scoreline undisturbed.

However, the resistance was brought to an end with a moment of brilliance from none other than Ogbeche. The Highlanders' no. 10 picked the ball up 25-yards out, took a touch and buried a bullet of a shot past Karanjit to give his team a well-deserved lead.

It was Ogbeche's 10th goal of the season and brought him level with FC Goa's Ferran Corominas at the summit of the top scorer's list for ISL 2018-19.

Chennaiyin FC Football
Get the latest Cricket news, check out the India cricket schedule, Cricket live score . Like us on Facebook or follow us on Twitter for more sports updates. You can also download the NDTV Cricket app for Android or iOS.