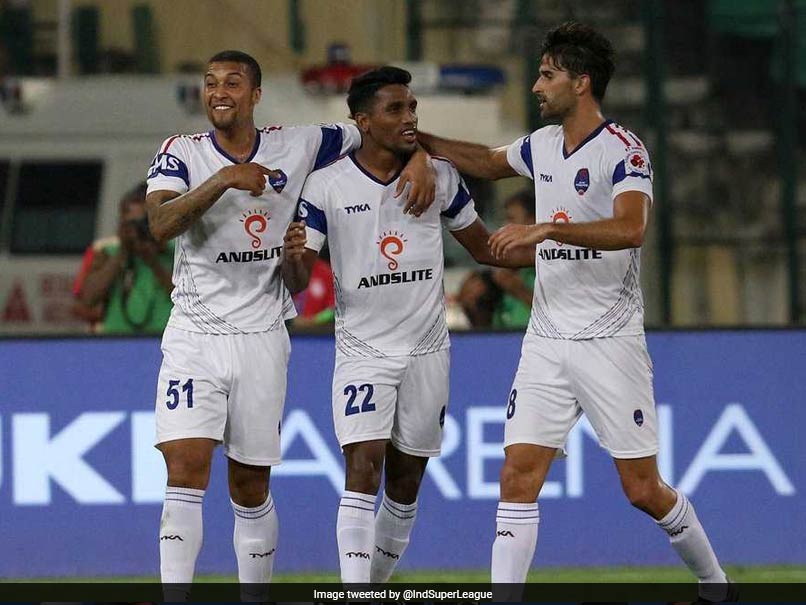 Delhi are placed ninth in the points table with seven points from 12 matches.© Twitter

Delhi Dynamos defeated Chennaiyin FC 3-1 to register their first win in the ongoing season of the Indian Super League (ISL) at the Marina Arena in Chennai on Saturday. Daniel Lahlimpuia, Bikramjit Singh and Nandhakumar Sekar scored in Delhi's memorable win that left ISL defending champions Chennaiyin FC reeling at the bottom of the points table. Delhi, placed ninth in the points table, have seven points from 12 matches, while Chennai are last with five points from equal number of matches.

It was the hosts that started the game strongly as first Salom and then Mailson came close to scoring the opener but impressive saves from Dorronsoro kept Chennaiyin at bay.

It was against the run of play though that Dynamos grabbed the opener. Mihelic found Nandhakumar and the winger's cross from the right was met by a glancing header from Daniel to score his first ever Indian Super League goal.

With five minutes to go for the first half, the hosts grabbed the equaliser. Sajid Dhot bought down Salom inside the box and the referee awarded the hosts a penalty, which was calmly slotted in by Raphael Augusto.

It was Dynamos though who started the second half on front foot as back to back corners handed them a chance at goal, but the hosts resolute defending kept the scoreline on level terms.

Three minutes later Dynamos added their third as local boy Nandha added the cherry on the top to hand Dynamos their first win of the season.

Chennaiyin FC Indian Super League Football
Get the latest updates on IPL Auction 2023 and check out  IPL 2023 and Live Cricket Score. Like us on Facebook or follow us on Twitter for more sports updates. You can also download the NDTV Cricket app for Android or iOS.