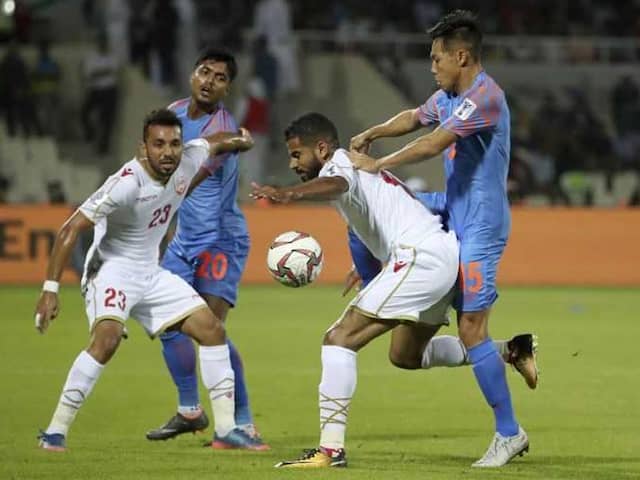 India were left shell-shocked as Bahrain won 1-0 in an enthralling Group A encounter of the Asian Cup 2019. It was in the 89th minute that the referee awarded Bahrain the penalty following captain Pronay Halder's foul inside the box. This defeat was heart-breaking for India as they checked the intensifying Bahrain attack throughout the match. But succumbed only in the dying minutes as Jamal Rashed grabbed the opportunity with both hands to score the solitary goal of the match. Gurpreet Singh, who captained India in the opening match (which India won 4-1 against Thailand) was India's saviour as he kept the Bahrain attack at bay. Defender Sandesh Jhingan also was equally effective in denying Bahrain attackers from scoring.

On the other hand, Thailand drew against hosts UAE as the match ended in a 1-1 draw. The result eliminated India from the AFC Asian Cup 2019 as Group A table-toppers UAE and Bahrain made it through to the Round of 16 with India finishing bottom of the group with three points.

23:22 IST: Full-time! And it's all over for India as they are left shell-shocked. Bahrain -1, India -0. Bahrain win and are through to the Round of 16. India have been eliminated after finishing last in Group A with three points.

The match between UAE and Thailand ends in a 1-1 draw, which means India are officially eliminated from the @afcasiancup as they finish with three points from their three games in Group A.#INDBAH #BackTheBlue #IndianFootball #AsianDream #BlueTigers

23:17 IST: Penalty for Bahrain! Captain Pronay Halder messes with a Bahrain opposition inside the D-box. Can Gurpreet Singh save India? And it's a GOAL! Jamal Rashed scores for Bahrain in the stoppage time. The "Great Wall of India" Gurpreet Singh couldn't guarantee India the safe passage through to the Round of 16.

Full-time! The Indians suffer a heartbreaking defeat after an injury-time winner from the spot for Bahrain.

23:15 IST: As the clock ticks, Bahrain continue to attack and India continue to defend! Possession continues to remain the same as the second half comes to a nail-biting finish.

23:12 IST: What a save! Kudos to Gurpreet Singh for that reflex that denied Bahrain a certain goal. Five minutes of play remaining plus the added time.

23:07 IST: Substitution for India as Anirudh Thapa comes in for Halicharan Narzary. Ten minutes of play remaining as tension intensifies. Bahrain are getting desperate. But the Indians have kept them at bay.

23:05 IST: Great save! Gurpreet neutralizes yet another attack from Bahrain.

23:01 IST: Bahrain miss again! This was their best chance to score from the foul. It seemed Bahrain will take the much-needed lead that could have saved them from getting eliminated. India take a slender advantage as the scoreline still reads Nil-Nil!

22:59 IST: Sandesh Jhingan cuts down a dangerous attack. Kudos to him for the save.

22:57 IST: Bahrain almost scores!  The ball hits the left goalpost and rebounds. India save themselves another let-off.

All qualify to the #AsianCup2019 round of 16. Will things change in the second half? pic.twitter.com/pVlSQDduAh

22:52 IST: Yellow card! First yellow card of the night shown to Bahrain player. And its free-kick to India. India fail to score.

22:50 IST: Jamal Rashid hits a free-kick from a close range. Gurpreet Singh pouches the ball that was heading towards him like a tracer bullet.

22:47 IST: Miss! Sandesh Jhingan misfires as Bahrain denies India a goal. India have had only three shots to goal. On the other hand, Bahrain have eight.

22:40 IST: The crowd at the Sharjah stadium is dominated by Indian fans as they root for their team.

46' - Second substitution for India as @jejefanai comes on in place of Ashique at the break.

22:08 IST: Meanwhile, Thailand have scored the much-needed equalizer against UAE. It's UAE -1, Thailand -1.

28' - India enjoy a prolonged spell of possession, which results in @chetrisunil11 receiving a grounded cross from the left. However, he is denied by a last-ditch tackle as he looks to turn and take aim.

22:04 IST: Another corner for Bahrain. And, it's yet another off-side for Bahrain! The desperation in the Bahrain players can be seen as this is a must-win game for them. Bahrain drew with hosts UAE in their opening game.

21:58 IST: Chance to score the opening goal for India missed. An interesting attack from the left flank goes in vain.

21:55 IST: Bahrain have committed three fouls so far. On the other hand, India have just one foul to their name.

21:54 IST: Free kick for India! The ball lands safely into the gloves of the Bahrainian goalie.

21:50 IST: Good cross pass for India! Udanta Singh crossed the ball towards Sunil Chhetri but the ball went past Chhetri before he could slide in.

21:47 IST: Bahrain have gone past the group stage only once in 2004 which was the "golden generation" for the Middle-East nation.

21:44 IST: Yet another off-side for Bahrain. It's for the third time now that Bahrain have breached Indian territory in a hurry.

21:42 IST: Chance for India! But the Bahrainian goal-keeper holds the ball easily. Pritam Kotal comes up with a delicate cross from the right flank. But Ashique could only find the goal-keeper's hands through a header.

21:40 IST: This is the second time that Bahrain have committed an off-side.

21:38 IST: Meanwhile, in the other match, UAE take an early lead against Thailand. Ali Mabkhout scored in the 7th minute.

21:33 IST: Free-kick! And a chance goes missed as the ball lofts over the Bahrain goal post.

21:25 IST: Prior to the match, Indian coach Stephen Constantine said, "We are coming here to win the game. We have done well in the last two matches and we need to win today".

We are coming here to win the game. We have done well in the last two matches and we need to win today. Even they need to win, so it will be interesting: @StephenConstan #INDBAH #AsianDream #BlueTigers #BackTheBlue #IndianFootball

21:22 IST: Players from both the teams come out from the tunnel. We are all set for the national anthems of both the nations.

21:08 IST: Head-to-head! India have won just one match against Bahrain in seven matches played so far between the two countries. India lost 2-5 to Bahrain exactly eight years ago on this date in 2011.

21:00 IST: Coach Stephen Constantine had fielded the same starting eleven in both against Thailand and UAE in a 4-4-2 formation.

20:55 IST: If both Thailand and India lose their matches on Monday, India will end at third as they defeated the 'War Elephants' 4-1 in their opening match.

20:50 IST: In the other match, Thailand will take on the hosts United Arab Emirates.

Lineups are in for the third and last game of group A for both sides.#AsianCup2019 pic.twitter.com/FgR8cRnHiF

20:30 IST: Permutations and combinations! This is how India can qualify for the AFC Asian Cup 2019 knock-out stage for the first time in their history.

20:03 IST: Hello and welcome to the live commentary of the AFC Asian Cup 2019 match between India and Bahrain

There was not a single knock-out match in that edition. But even a defeat on Monday may still see India (3 points from 2 matches) through to the knock-out rounds as one of the four third-placed teams if hosts United Arab Emirates (4 from 2 matches) beat Thailand (3 from 2 matches) in Al Ain in the other Group A match to be played simultaneously.

Four third-placed sides from the six groups of four team each will also advance to the knock-out rounds, along with the top two countries. Under the competition rules of the Asian Cup, if two teams end their group stage engagements on equal points, the ranking will be decided first on the basis of head to head result.

India Sunil Chhetri Jeje Lalpekhlua Sandesh Jhingan Football Football Live Score Live Blogs
Get the latest Cricket news, check out the India cricket schedule, Cricket live score . Like us on Facebook or follow us on Twitter for more sports updates. You can also download the NDTV Cricket app for Android or iOS.