With the Indian Under-17 team playing as Indian Arrows and underdogs Minerva Punjab still undefeated, the I-League is definitely a delight for all football lovers. 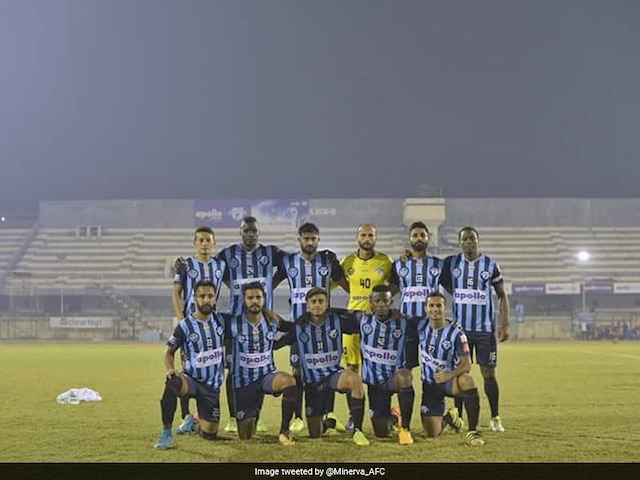 Ludhiana-based Minerva Punjab FC are leading the table with 13 points from 5 games.© Twitter

The Hero I-League, which was the primary football league until last year, has been sidelined due to the "merged ISL". Bengaluru FC, one of the strongest sides, shifted from the I-League to the ISL in the merger. Despite this, the I-League has been very exciting to watch this season, with the teams playing good quality football and generating some fine results.

Bengaluru FC (shifted to ISL), DSK Shivajians (pulled out) and Mumbai FC (relegated) are the three teams who have been replaced by Neroca FC (promoted from Second Division League), Gokulam Kerala FC (new entrants) and Indian Arrows (AIFF's Developmental Side). Sticking to a ten-team league, the I-League will represent India's participation in the AFC Champions League.

As on Christmas Day, Ludhiana-based Minerva Punjab FC are leading the table with 13 points from 5 games. They are currently the only unbeaten side across both the top-division leagues in the country. Bhutanese star playmaker Chencho Gyeltshen and young midfielder William Opoku have been vital in their success, scoring and assisting majority of the goals between them. Although it is a long season, Minerva are being touted by fans to pull off a Leicester, much like Aizawl FC, who had famously shocked the country to win the league last season.

East Bengal, coached by last season's title-winning manager Khalid Jamil, are currently behind the leaders with 10 points in 5 games having only lost the derby game against rivals Mohun Bagan. Much like Minerva, the Red and Gold foreign contingent has been the driving force in their campaign so far, where they have scored the maximum goals (12). The likes of Mahmoud Al-Amna, Katsumi Yusa and Eduardo Ferreira have been in top form, while ex-Aizawl midfielder Laldanmawia Ralte has been the stand-out Indian in the side.

Much to the dislike of the fan-base and ex-East Bengal legends, senior players like Arnab Mondal and Mohammed Rafique haven't featured regularly for the Kolkata club.

Arch-rivals Mohun Bagan, who started the season with comparatively unknown Indian players, have once again excelled under manager Sanjoy Sen, who is known for his brilliant tactics and man-management. The Mariners managed to keep hold of Haitian star player Sony Norde and have built the team around him, adding quality foreigners in Kingsley, Cameron Watson and Dipanda. With 9 points in 5 games, Mohun Bagan have conceded the least number of goals (2) having kept the most clean sheets (3).

Newly promoted NEROCA FC from Imphal have also been impressive, standing third in the league, level on points with East Bengal. Having roped in impressive foreign players like Akhlidin Israilov and Chidi Odili, they have seen their Indian players fare equally well with the likes of Pritam Singh and Subhash Singh chipping in with goals. They got widely appreciated after holding Mohun Bagan for a stalemate in an away game.

Another club from the North-East, Shillong Lajong FC, has been inconsistent so far, showing only glimpses of their quality and potential. Their Indian contingent hasn't taken too long to adapt to the demands and have thrown in some good performances. Players like Samuel, Kynshi, Tlang and goalkeeper Lachenpa are all being looked at as players with a promising future and apart from the 5-1 routing by East Bengal, they have been a good unit.

Defending champions Aizawl FC are in the bottom half of the table, having lost their title-winning manager and most of the players from the previous season to the wealthier teams. They have won just one game, against Churchill Brothers, having scored the joint-lowest goals so far in the league.

New entrants Gokulam Kerala FC have struggled to adapt to the top division league, having won only one game, against the Indian Arrows in Delhi. Although they have tried to play good football consistently, the foreign players like Daniel Addo and Khaled Al Saleh have taken some time to adapt to the Indian conditions, having not played here previously.

The Indian Arrows, comprising of the Indian Under-17 players, have been included in the league after a span four years. Mainly focusing on the development and exposure of the players and preparing them for the future, the Arrows have received much fanfare after the FIFA Under-17 World Cup concluded in India. They have won one game out of their four played, having scored three goals - all in the same match.

Goa-based Churchill Brothers FC are at the bottom of the league having no points from their five games played. They have scored the lowest goals (2) while conceding the highest (13). Coming back after being denied a chance to play in the league for not being able to match the club licensing criteria, Churchill were unable to bring in their foreign players on time due to visa issues, and had a poor season in the Goa Pro League as well.

Comments
Topics mentioned in this article
Bengaluru FC iLeague Football
Get the latest Cricket news, check out the India cricket schedule, Cricket live score . Like us on Facebook or follow us on Twitter for more sports updates. You can also download the NDTV Cricket app for Android or iOS.