In today's matches, England will take on Panama; Japan on Senegal; while Colombia on Poland. 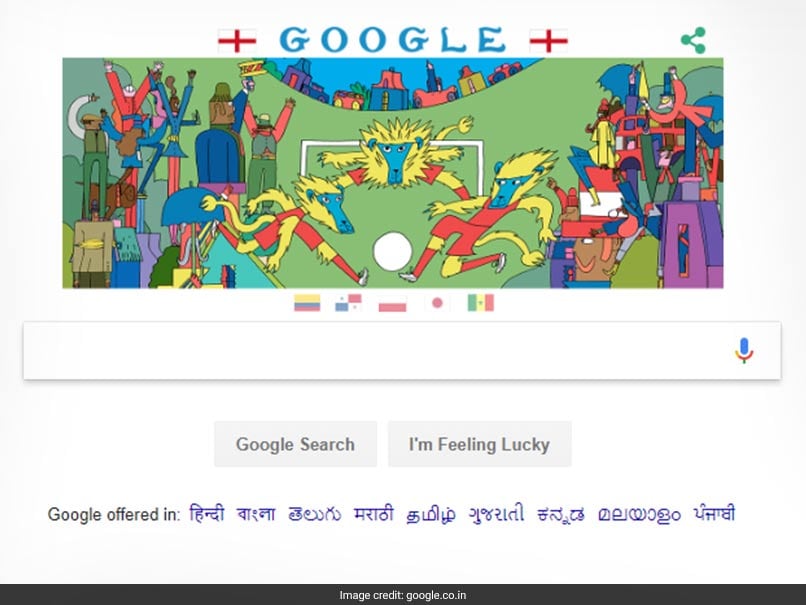 The teams have been divided into 8 groups, with each team playing 3 matches each in group stages.© Google Screengrab

On the occasion of the day 11 of the FIFA World Cup 2018, the internet search engine Google has come up with a set of doodles of the football culture of six countries participating in three matches on Sunday.
As a part of Google Doodle series on the 32 participating countries, doodle depicts the football culture the countries of six teams from Group G and H, namely, England, Panama, Japan, Colombia, Senegal and Poland. On clicking on the doodle on the home page of Google, the doodles switch from one country to the next to illustrate the unique football culture of six nations unique for them.

Colombia's doodle artist Diego Cadena Bejarano opines that during the World Cup everyone comes together leaving their differences and difficulties behind in excitement and look forward to a better and brighter future.

In today's matches, England will take on Panama; Japan on Senegal; while Colombia on Poland.

The teams have been divided into 8 groups, with each team playing 3 matches each in group stages.

Two teams from each group will head into the knockout rounds which are scheduled to start from 30th June.

A total of 64 matches will be played in 12 venues located in 11 cities. The Luzhniki Stadium will host the second semi-final on 11 July and the final on 15 July.

The Krestovsky Stadium in Saint Petersburg will host the first semi-final on 10 July and the third-place play-off on 14 July.

Poland 2018 FIFA World Cup Football
Get the latest updates on ICC Women's Cricket World Cup 2022 and IPL 2022, check out the Schedule , Live Score and IPL Points Table. Like us on Facebook or follow us on Twitter for more sports updates. You can also download the NDTV Cricket app for Android or iOS.