No German team has won the treble of European Cup, domestic league and cup titles before, and Bayern are bidding to become only the seventh side in Europe to achieve the feat. 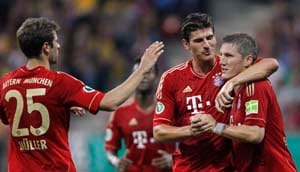 Champions League winners Bayern Munich are aiming to complete a historic treble in Saturday's German Cup final against VfB Stuttgart but the Bavarians are smarting at the enforced absence of centre-back Dante for the Berlin showdown.

Bayern have been told by the Brazilian Football Confederation (CBF) that Dante, as well as defensive midfielder Luiz Gustavo, must report for international duty before Saturday's deadline as Brazil prepare to host the Confederations Cup from June 15-30.

Both players are upset at missing the final, and Bayern chairman Karl-Heinz Rummenigge has branded CBF's standpoint as "inhuman, ruthless, unfair and unacceptable", but only Dante would have started in Berlin.

No German team has won the treble of European Cup, domestic league and cup titles before, and Bayern are bidding to become only the seventh side in Europe to achieve the feat.

Should they write their names into the history books, it will be a fitting tribute to the Bayern team which won this season's Bundesliga title by breaking or equalling 25 league records.

Having won the league title at the start of April, then beaten Borussia Dortmund 2-1 at Wembley last Saturday to claim the European crown, vice-captain Bastian Schweinsteiger has said it is "very, very important" to complete the set.

"The team is very eager to win the cup," said Schweinsteiger.

"Of course, it was something special to win at Wembley, but the concentration on Berlin is raising day by day."

Schweinsteiger can equal Oliver Kahn's record of six cup triumphs if Bayern lift the trophy for the 16th time.

Belgium centre-back Daniel van Buyten will come in for Dante at centre-back alongside Jerome Boateng in the only change from the team which started the Wembley final.

France winger Franck Ribery will play after serving a cup suspension in the wake of his sending-off in the 2-0 last-16 win over Augsburg in December.

It will be the Frenchman's fourth appearance in the final at Berlin's Olympic Stadium in six years, with a crowd of just over 74,000 expected for the game.

"We've worked so hard and invested so much. We have to take our chance of the treble," said the 30-year-old.

Stuttgart, who finished 12th in the Bundesliga and are looking to get their hands on a trophy for the first time since winning the league in 2007, are expected to be at full strength with captain Serdar Tasci playing with a special insole in his boot to counter Achilles tendon problems.

While Bayern are overwhelming favourites, Stuttgart are hoping to catch them on a bad day and the Bavarians will need no reminding of their 5-2 Cup final rout at the hands of Borussia Dortmund last season.

"We have nothing to fear. We have the chance to achieve something very special and take a title. It's positive pressure for us," said Gentner, with Stuttgart having last won the cup in 1997.

"Bayern could well underestimate us, but they have proven they are hungry and are eager to finish the season with a treble success."

The Bavarians have extra motivation as they look to send off coach Jupp Heynckes with the treble before the 68-year-old steps down after two seasons in charge to be replaced by ex-Barcelona boss Pep Guardiola.

Comments
Topics mentioned in this article
Football Bayern Munchen VfB Stuttgart Barcelona Lionel Messi Bastian Schweinsteiger Wembley Stadium
Get the latest updates on India vs South Africa and check out  Schedule, Results and Live Score. Like us on Facebook or follow us on Twitter for more sports updates. You can also download the NDTV Cricket app for Android or iOS.