Cristiano Ronaldo had been under the spotlight after criticising his teammates as Real Madrid's realistic title hopes ended with a 1-0 defeat at home to Atletico Madrid last weekend. 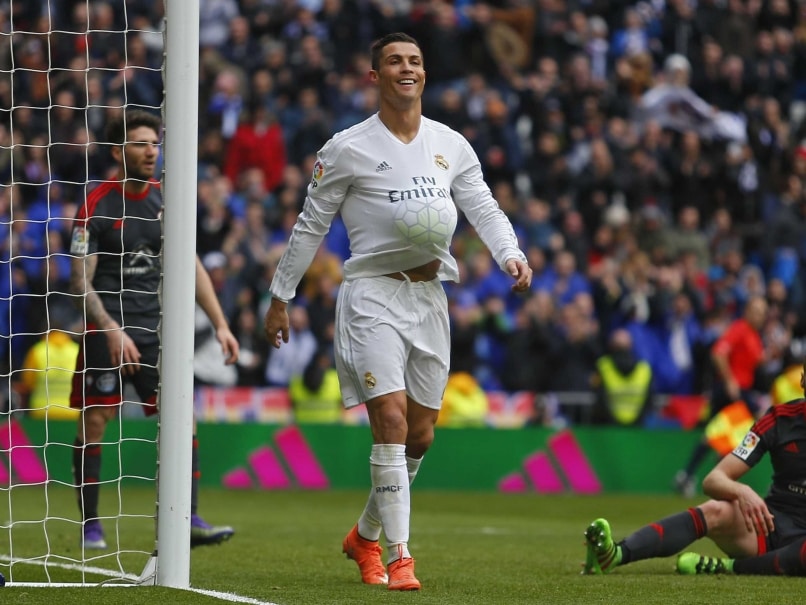 Cristiano Ronaldo was jeered by a section of Real Madrid's famously demanding fan base before he netted four goals past Celta Vigo.© AP
Madrid:

Real Madrid boss Zinedine Zidane hailed Cristiano Ronaldo as a unique talent after he scored four goals in 28 minutes in a 7-1 thrashing of Celta Vigo on Saturday.

Ronaldo had been jeered by a section of Madrid's famously demanding fan base early in the second-half, but responded in empathic fashion to move ahead of Telmo Zarra as La Liga's second-highest goalscorer of all-time with 252 goals in just 228 games.

"You know Cristiano, he is capable of scoring four goals and there are very few people capable of doing that. That is why he is unique," said Zidane.

"It is part of football that the fans whistle now and then.

"They are demanding fans, but at the same time they know their players well and always want more.

"That is good to help us improve and do more. Above all, I am left with his performance."

Ronaldo had been under the spotlight after criticising his teammates as Real's realistic title hopes ended with a 1-0 defeat at home to Atletico Madrid last weekend.

In Zidane's six home games since taking charge in January, Madrid have now scored 27 times, despite failing to find the net against Atletico.

Pepe put the hosts in front towards the end of an uneventful first-half.

Ronaldo then took over with a stunning strike from 25 yards before curling home a brilliant free-kick for Madrid's third.

Iago Aspas pulled a goal back for Celta before Ronaldo completed his hat-trick with a tap in from close range, then added his 39th goal of the season from Isco's corner.

Substitute Jese Rogriguez smashed home the sixth at the end of a great solo run.

However, the other big news was the goalscoring return of Gareth Bale after six weeks out with a calf injury as he rounded off the hammering from the edge of the area.

And Zidane believes the Welsh star will be ready to start when Roma visit the Santiago Bernabeu on Tuesday trailing 2-0 from the first-leg of their Champions League last-16 tie.

"He looked good. He is happy, above all just to play after such a long time out," said Zidane.

"I am happy with how he played. We have to see tomorrow and Monday to prepare for Tuesday's game, but I think he is ready (to start.)"

Comments
Topics mentioned in this article
Cristiano Ronaldo Real Madrid Football
Get the latest updates on ICC T20 Worldcup 2022 and CWG 2022 check out the Schedule, Live Score and Medals Tally. Like us on Facebook or follow us on Twitter for more sports updates. You can also download the NDTV Cricket app for Android or iOS.