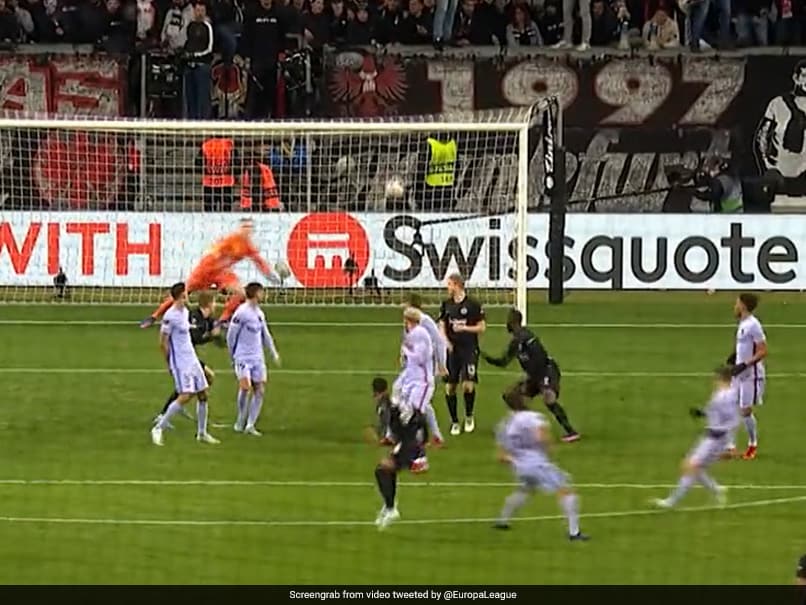 Frankfurt's Ansgar Knauff scored a sensational half-volley from outside the box against Barcelona in their Europa League quarter-final first leg clash on Thursday. Frankfurt won a corner early in the second half and the cross into the box was headed out, but the ball fell kindly for Knauff just outside the box. The 20-year-old took a touch with his left foot to bring it down before unleashing a powerful half-volley with his right foot. The ball swerved as it rocketed into the top-right corner, giving Marc-Andre ter Stegen no chance in the Barcelona goal.

The goal broke the deadlock in the match, with Frankfurt taking a 1-0 lead.

However, Barcelona equalised through Ferran Torres, who capped off a lovely team move.

Ousmane Dembele cut in from the right side and played a pass to Frenkie de Jong at the edge of the box. The Dutch midfielder then played a neat one-two with Ferran Torres to turn the defender marking him, before squaring it to the Spaniard again to apply the finishing touches.

Torres took a touch before slotting the ball home for the equaliser.

The match finished 1-1, despite Frankfurt going down to 10 men after 78 minutes as centreback Tuta received his marching orders for a second yellow card.

In the other Europa League quarterfinal matches, RB Leipzig were held to a 1-1 draw at home by Atalanta, while the match between West Ham and Lyon also finished 1-1.

Braga were the only team to register a win in the first leg of the quarters as they beat Scotland's Rangers 1-0 at home.