Erling Braut Haaland's tally of seven goals is the most by any Bundesliga player in their first three league matches. 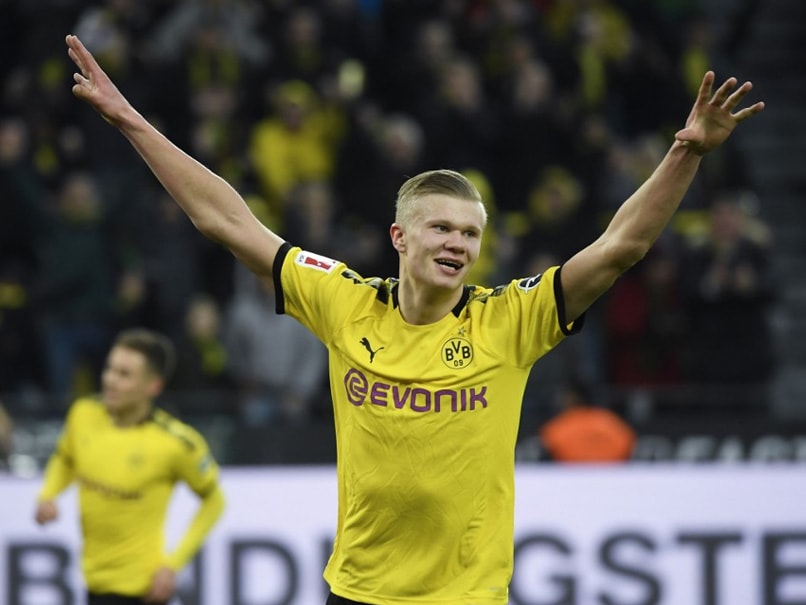 Erling Braut Haaland insisted he needs to get fitter despite making it seven goals in three games for Borussia Dortmund with another double in Saturday's 5-0 Bundesliga thrashing of Union Berlin, while Bayern Munich usurped RB Leipzig at the top of the table. The 19-year-old Haaland, who had netted five times in his first two appearances after signing from Salzburg, scored either side of half-time at Signal Iduna Park on his first Dortmund start. Haaland's tally is the most by any Bundesliga player in their first three league matches.

But the Norwegian said he must still regain fitness after a knee injury last month restricted his training.

"It was pretty tough today, but it was also nice to play from the start," Haaland told Sky. "I have to get even fitter, I am still not 100 percent."

Dortmund stay third in the table, three points behind leaders Bayern, who beat Mainz 3-1 to leave the top four clubs all within three points of each other.

Haaland added to his record-breaking run on 18 minutes with a simple tap-in from a Julian Brandt cross, then won a penalty, which captain Marco Reus converted midway through the second half.

Haaland completed the thrashing when a Brandt back-heel fell into his path and he drilled his shot past the despairing Gikiewicz.

In Mainz, goals by Robert Lewandowski, Thomas Mueller and Thiago Alcantara fired Bayern a point clear of Leipzig, who they host next weekend.

"We have six wins in a row now, which gives us a lot of self-confidence and if we keep playing like this, we will be very hard to stop," said Bayern full-back David Alaba.

Lewandowski netted his 22nd league goal of the season on just eight minutes to herald a powerful first half by the visitors.

Mueller hit their second on 14 minutes, finishing a move he started after Lewandowski and Leon Goretzka cut the Mainz defence open.

Alcantara made it 3-0 on 30 minutes by beating three defenders with superb footwork before smashing the ball past Mainz goalkeeper Robin Zentner.

Goretzka played an unlucky part in the Mainz goal when a header by defender Jeremiah St Juste cannoned off the back of his head and beat Bayern goalkeeper Manuel Neuer on the stroke of half-time.

Previous pace-setters Leipzig failed to stay at the top despite coming from two goals down in their 2-2 home draw with 10-man Borussia Moenchengladbach.

Leipzig striker Patrik Schick pulled a goal back on 50 minutes, poking the ball over the line after Gladbach goalkeeper Yann Sommer failed to hold a cross after stumbling over defender Denis Zakaria.

The game turned on the hour when Gladbach had Plea sent off for arguing with the ref after being booked.

Taking advantage, Leipzig attacked hard and Christopher Nkunku rescued a point when the French forward sprinted into the area and fired into the top corner on 89 minutes.

Fifth-placed Bayer Leverkusen lost ground as they went down 2-1 at Hoffenheim thanks to goals from striker Andrej Kramaric and Danish defender Robert Skov.

A Timothy Chandler header just before the final whistle rescued a point for Eintracht Frankfurt in their 1-1 draw at Fortuna Duesseldorf, who moved off the bottom.

It was Fortuna's first game under new coach Uwe Roesler, after the former Manchester City striker took charge on Wednesday in a bid to avoid relegation.

Borussia Dortmund Erling Braut Haaland Jadon Sancho Football
Get the latest updates on Fifa Worldcup 2022 and check out  Fifa World Cup Schedule, Stats and Live Cricket Score. Like us on Facebook or follow us on Twitter for more sports updates. You can also download the NDTV Cricket app for Android or iOS.