Borussia Dortmund said Erling Braut Haaland, who scored eight times in the group stage of this season's Champions League, had signed a contract until 2024. 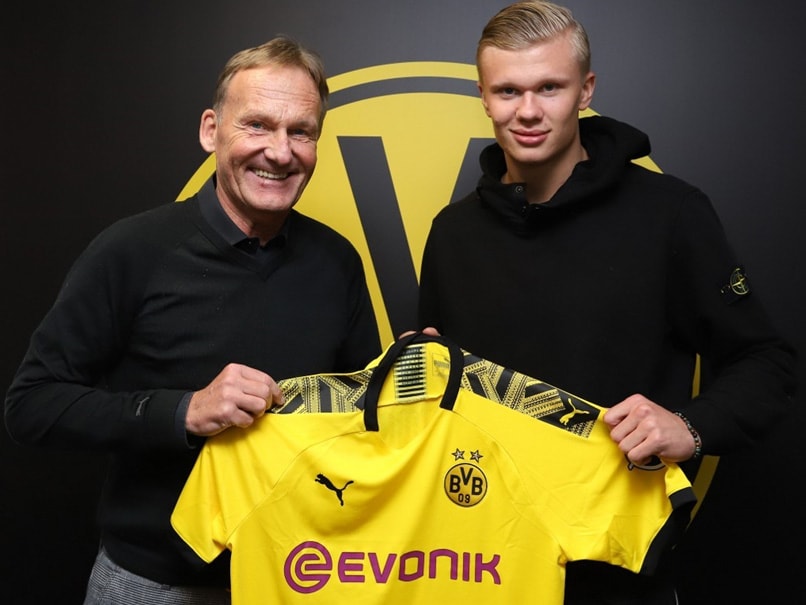 Borussia Dortmund have signed teenage goalscoring sensation Erling Braut Haaland from RB Salzburg, beating off a host of top European clubs, the German Bundesliga club announced on Monday. Borussia Dortmund said the 19-year-old Norway forward, who scored eight times in the group stage of this season's Champions League, had signed a contract until 2024 but did not mention a fee. Haaland has caught the eye of clubs around Europe, reportedly including Juventus and Manchester United, after scoring 28 goals in 22 games in all competitions so far this campaign.

"From the beginning I had the feeling I definitely wanted to switch to this club, to walk this path," he said.

He will join up with his new teammates on January 3 for a training camp in Marbella before Dortmund resume after the Bundesliga's winter break with a visit to Augsburg on January 18.

In a video posted on the Dortmund website, Haaland wished Dortmund fans a happy new year as he pored over a 2020 to-do list topped with "learn German".

Earlier in December, the forward had been spotted landing in the city to meet with club representatives.

Dortmund, currently fourth in the Bundesliga, have been looking for a new striker with Spain international Paco Alcacer and World Cup winner Mario Goetze struggling for consistency this season.

"Despite many offers from the very top clubs across Europe, Erling Haaland has chosen the sporting challenge at BVB (Dortmund)," chief executive Hans-Joachim Watzke said in a statement.

"We can all look forward to an ambitious, athletic and physically strong centre forward... at 19, Erling is right at the start of what will hopefully be a great career."

Haaland became the third youngest player to score a Champions League hat-trick when he netted three times in a 6-2 victory over Genk in September.

Despite his impressive form Salzburg failed to reach the last 16 following a 2-0 loss to defending champions Liverpool in their final group game this month.

Manchester United Football
Get the latest updates on ICC T20 Worldcup 2022, check out the Schedule and Live Score. Like us on Facebook or follow us on Twitter for more sports updates. You can also download the NDTV Cricket app for Android or iOS.