If Eden Hazard returns against Sevilla in La Liga on January 18 he will have been out for almost eight weeks. 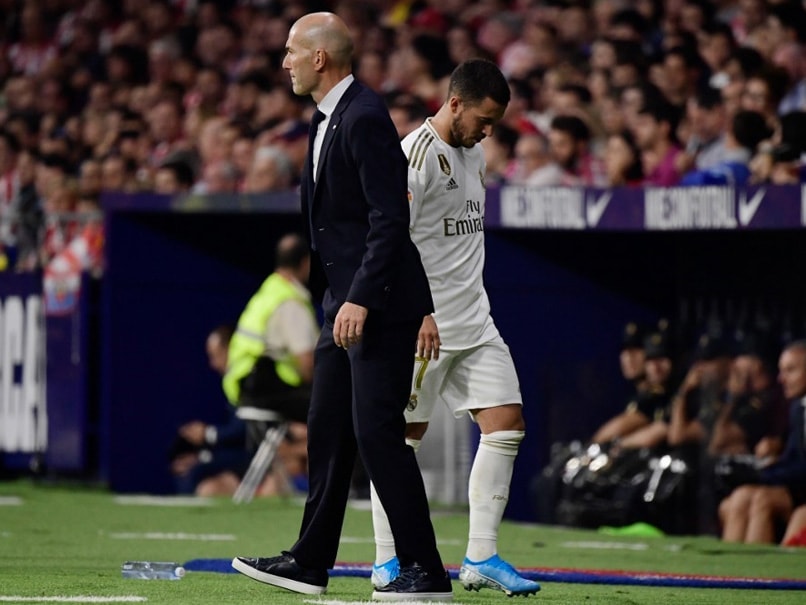 Zinedine Zidane said that Eden Hazard will not play in the Spanish Super Cup next week.© AFP

Eden Hazard's injury-plagued start at Real Madrid will continue this month after Zinedine Zidane said on Friday the Belgian will not play in the Spanish Super Cup next week. Hazard suffered an ankle fracture during Madrid's draw against Paris Saint-Germain on November 26 and was expected to be out for around four to six weeks. But Zidane has confirmed Hazard will miss Madrid's La Liga game against Getafe on Saturday and will not travel to Saudi Arabia, where his team face Valencia in the Spanish Super Cup semi-finals on Wednesday before a potential final against either Barcelona or Atletico Madrid four days later.

"He is 100 per cent out of the Super Cup," said Zidane in a press conference. "He is not travelling, he is recovering and we hope that just after the Super Cup, little by little, we could see him with us again."

If Hazard returns against Sevilla in La Liga on January 18 he will have been out for almost eight weeks.

The 28-year-old, who joined Real Madrid for 100 million euros from Chelsea last summer, also missed three matches at the start of the season with a thigh strain.

He has scored one goal in 13 appearances for his new club so far.

Madrid found form without him before Christmas but trail Barcelona by two points in the table after consecutive draws in the Clasico at Camp Nou and then at home to Athletic Bilbao.

They play sixth-placed Getafe this weekend at the Coliseum Alfonso Perez, where Zidane's team were held to a goalless draw in April.

Marcelo and Lucas Vazquez are available again after recovering from injuries but Sergio Ramos is suspended, meaning Eder Militao is likely to play in central defence.

Zidane also suggested some fringe players could be allowed to leave in the January transfer window. Striker Mariano Diaz is among those that could depart.

"There are players that have not had minutes and that can be a problem but we speak with them like always," Zidane said. "Between now and January 31 a lot can happen."

Real Madrid Eden Hazard Zinedine Zidane Football
Get the latest updates on ICC T20 Worldcup 2022 and CWG 2022 check out the Schedule, Live Score and Medals Tally. Like us on Facebook or follow us on Twitter for more sports updates. You can also download the NDTV Cricket app for Android or iOS.