Atletico Madrid, who are third in La Liga, were one of four top-flight sides dumped out of the Copa del Rey on Thursday at the last 32 stage. 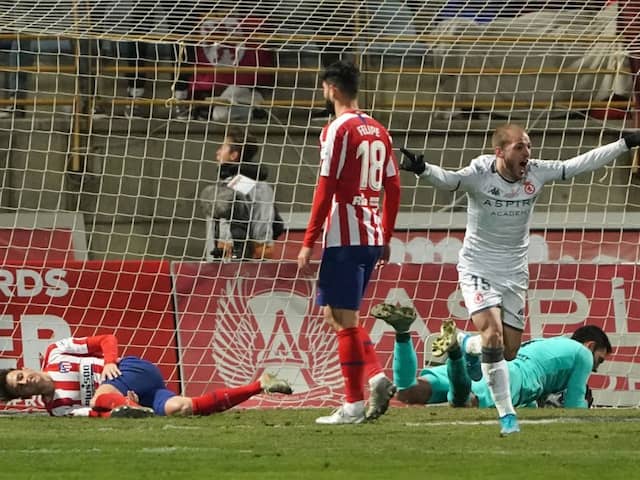 Atletico Madrid were knocked out of the Copa del Rey on Thursday, defeated 1-2 in extra-time by third division Cultural Leonesa. Atletico Madrid, who are third in La Liga and are looking forward to a Champions League clash next month against Liverpool, were one of four top-flight sides dumped out of the tournament on Thursday at the last 32 stage. Argentine striker Angel Correa put them in front in the 62 minutes before Leonesa levelled seven minutes from the end through Julen Castaeda.

Sergio Benito then delivered the winner for the hosts in the second period of extra-time.

Defeat completes a miserable January for Diego Simeone's Atletico who were defeated in the Spanish Super Cup by Real Madrid and 2-0 at Eibar in La Liga last weekend.

"The responsibility is mine alone," admitted Simeone.

"Cultural deserved the victory, we had no forcefulness."

Simeone's men will next be seen in action in La Liga when his side takes on Leganes.

Atletico could do with a win after being shocked 2-1 by third division CD Leonesa in the Spanish Copa del Rey on Thursday.

Atletico Madrid's pursuit of Edinson Cavani will likely come too late for their own title challenge, even if they can persuade Paris Saint-Germain to part with the 32-year-old striker this month.

Eight points is now the gap between them and the top two and while Cavani could certainly alleviate their problems in front of goal.

Atletico host struggling Leganes on Sunday while Sevilla, in fourth, play at home on Saturday against Granada.

Atletico Madrid Football
Get the latest Cricket news, check out the India cricket schedule, Cricket live score . Like us on Facebook or follow us on Twitter for more sports updates. You can also download the NDTV Cricket app for Android or iOS.