Both Arsenal and Barcelona have won two games out of two and victory on Matchday 3 will take them closer to qualification for the knockout phases. 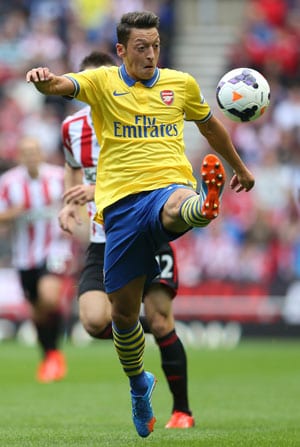 Arsenal and Barcelona are two of the sides looking to make it three wins out of three when the Champions League resumes this week.

A closer looks at all of Tuesday's matches:

Steaua Bucharest, the 1986 champions, are looking for their first points in the Champions League this season after defeats to Schalke and Chelsea.

The Bucharest club, who won their 24th Romanian title last season, have won just four of their 38 group matches over seven campaigns, picking up 11 draws. Their last victory came at Dynamo Kiev in 2006 while their most recent home win was against Widzew Lodz in 1996.

Basel, semi-finalists in the Europa League last season, could not build on their surprise 2-1 matchday one victory at Chelsea, losing 1-0 at home to group leaders Schalke last time out.

They currently lead the Swiss league.

Chelsea and Schalke last met in the 2007/08 group stage, with the match in Germany ending scoreless while the English club were 2-0 victors at Stamford Bridge thanks to Florent Malouda and Didier Drogba.

Schalke are hoping to welcome back goalkeeper Timo Hildebrand from a back injury, while US midfielder Jermaine Jones and Ghana star Kevin-Prince Boateng should be fit after knee injuries. But Schalke look to be without defensive midfielder Marco Hoeger, who twisted his knee against Braunschweig in the 3-2 win at the weekend.

Chelsea badly need a win in Gelsenkirchen to build on their 4-0 win at Steaua Bucharest.

Chelsea are unbeaten in their last six games since their shock defeat at home to Basel and have scored 10 goals in their last three games.

Ashley Cole is likely to miss the match after suffering a rib injury while Germany winger Andre Schuerrle, who missed Saturday's 4-1 win over Cardiff with a thigh injury, could return along with Spain striker Fernando Torres.

Premier League leaders Arsenal and Dortmund, last season's Champions League runners-up, faced each other in 2011-2012 when two Robin van Persie strikes gave Arsenal the points at home despite Shinji Kagawa's injury-time reply. Van Persie and Ivan Perisic were on the scoresheet in a 1-1 draw in the return game.

The Gunners are in the group stage for the 16th season in a row. For the sixth time in eight campaigns they had to negotiate a qualifying round, dispatching Fenerbahce 5-0 on aggregate in the play-offs with in-form Aaron Ramsey scoring three times.

Arsenal have managed to move to the top of the Premier League, two points ahead of Chelsea and Liverpool, without a number of key players such as Theo Walcott, Alex Oxlade-Chamberlain and Lukas Podolski.

Dortmund are second in the Bundesliga, a point behind Bayern Munich, after a hard-fought 1-0 win at home to Hanover on Saturday.

The German side are without midfielder Nuri Sahin who has an ankle injury.

Brazilian defender Lucas Mendes will miss the game after suffering an ankle injury in Friday's 1-0 defeat at Nice. With two defeats from their first two Group F matches, Marseille must beat the Italians to keep their knock-out stage hopes alive.

Napoli could be without Argentine striker Gonzalo Higuain who has a thigh strain. Goran Pandev is likely to start for a Napoli team who have so far beaten Borussia Dortmund but lost to Arsenal.

Zenit's record signing Hulk will make an emotional return to the club where he scored 78 goals. The 27-year-old Brazilian has started to show form for Zenit this term, after a troubled first season where some of his team-mates objected to his wages, scoring seven goals in eight league appearances.

Zenit are on a hot streak with seven league successive wins but have just a single point from their European campaign.

Porto have three points and will be looking to preserve their unbeaten home record against Russian sides which stands at five, although the last time these two were in the same group, it was Zenit who progressed to the last-16.

Atletico suffered their first league defeat of the season, 1-0 at Espanyol on Saturday. Diego Simeone's men have two wins from two in the Champions League, including an impressive come from behind victory at Porto.

Atletico are likely to be without Brazilian youngster Leo Baptistao, who has a sprained ankle, and will most likely be replaced by 25-year-old Diego Costa, who has missed two games through suspension, but is the Liga leading scorer with 10 goals. He will be keener than ever to impress Spanish coach Vicente del Bosque as he seeks to get into the squad for next year's World Cup finals in his birthplace of Brazil. The Scottish champions desperately need a result in the first of two clashes with Ajax, but will be without captain Scott Brown, who is suspended following his red card against Barcelona, and Kris Commons, who went off early in their draw with Hibs on Saturday with a hamstring strain. Winger James Forrest looks set to start after scoring a fine goal.

Ajax drew 1-1 with league leaders Twente on Saturday and will be looking to at the very least put themselves in position for the Europa League spot having garnered one point in a 1-1 draw with Milan in their previous match.

Milan could count themselves fortunate to have grabbed a point against Ajax, a last minute penalty by Mario Balotelli forcing the draw. However, the talented striker is likely to be a key absentee as he suffered a thigh injury in last week's World Cup qualifier with Armenia. However, they are also likely to have to call on third choice goalkeeper Marco Amelia as Christian Abbiati is injured and Gabriel, who played on Saturday, was not on the list of the Champions League squad.

Barcelona, looking for their third win in three group games, failed to score in a league match for the first time since January 2012 with a 0-0 draw with Osasuna. Carles Puyol made his first start after a seven-month absence due to knee surgery while four-time world player of the year Lionel Messi came on for the final quarter after sitting out several games with a thigh strain.

Comments
Topics mentioned in this article
Football Kevin-Prince Boateng Lukas Podolski Barcelona AC Milan Bayern Munchen Arsenal Sepp Blatter
Get the latest Cricket news, check out the India cricket schedule, Cricket live score . Like us on Facebook or follow us on Twitter for more sports updates. You can also download the NDTV Cricket app for Android or iOS.