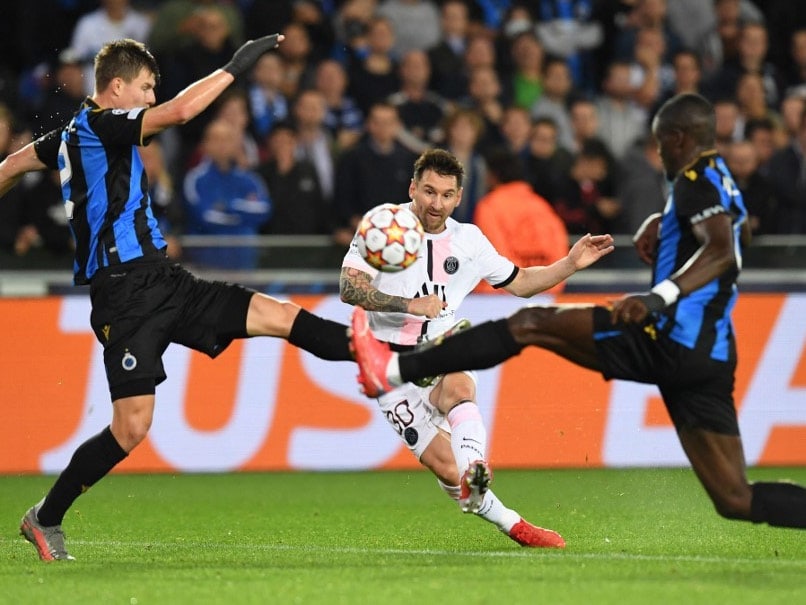 Champions League: Lionel Messi hits the crossbar during the first-half for PSG vs Club Brugge.© AFP

Having finally made his full club debut for Paris Saint-Germain in the UEFA Champions League, Lionel Messi failed to score a goal with some missed attempts at the Jan Breydel Stadium. The closest Messi came to scoring was in the 29th minute when, with the score level at 1-1, the Argentine attacker received a pass near the right flank. Cutting in from the edge of the opposition box, he curled in a stunning effort which was denied by the crossbar. The former Barcelona captain was left expressing his disappointment after the attempt, which could have given PSG the lead in a game that saw no further goal.

Here is the video of Messi's stunning effort in the first-half:

One fan even pointed out that it was identical to a shot he took 15 years ago against Chelsea, during a Champions League match for Barcelona. Here is the video of Messi's identical shot for Barcelona:

With the draw, the Ligue 1 heavyweights are currently second in Group A. Manchester City are on top of the table with three points, with Brugge in third spot. RB Leipzig are bottom of the table after matchday 1.

Midfielder Ander Herrera, who has been in fine form this season, opened the scoring for PSG in the 15th-minute. But a counterattack by Brugge led to the equaliser in the 27th-minute, which was converted by Hans Vanaken.

Despite the draw, PSG will be hoping to build some momentum in their upcoming UCL matches. Messi already made his debut previously in a Ligue 1 game at Reims, where he featured for only 24 minutes.

The 34-year-old will be aiming to improve his performance and form a lethal combination with Neymar and Kylian Mbappe.

Lionel Messi Ander Herrera Football
Get the latest updates on ICC T20 Worldcup 2022 and CWG 2022 check out the Schedule, Live Score and Medals Tally. Like us on Facebook or follow us on Twitter for more sports updates. You can also download the NDTV Cricket app for Android or iOS.