Paris Saint-Germain were held to a 1-1 draw by Club Brugge as Lionel Messi made his first start for the club since moving there from Barcelona. 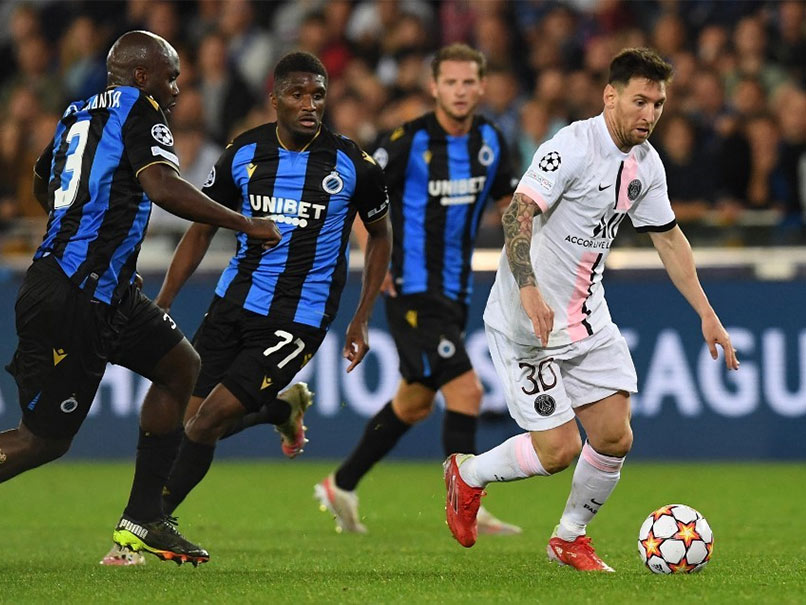 Lionel Messi finally made his first start for Paris Saint-Germain on Wednesday but the disjointed French giants had to settle for a 1-1 draw with Club Brugge in Belgium to begin their Champions League campaign. Ander Herrera gave PSG an early lead at the Jan Breydel Stadium only for Hans Vanaken to equalise for the home side, who were excellent and thoroughly deserved their point. Messi -- who had played just 24 minutes as a substitute prior to this game -- is still looking for his first goal for his new club although he hit the bar in the first half and tested Brugge goalkeeper Simon Mignolet after the break before picking up a yellow card for a foul on Mats Rits.

However it was not a convincing performance from the Parisians as coach Mauricio Pochettino lined up his star attacking trio of Messi, Neymar and Kylian Mbappe together for the first time.

"We need time for them to get to know each other," insisted Pochettino of his front three.

Mbappe came off hurt in the second half and PSG, despite building a team with the aim of winning the Champions League, have already complicated their chances just of making it out of a difficult Group A.

They next host Manchester City, the team that eliminated them in last season's semi-finals and who began their campaign with a remarkable 6-3 victory against RB Leipzig on Wednesday.

"I am pleased with the effort. It wasn't a great evening for us but we need to stay calm and keep working," said Pochettino.

"The most important thing is to get the necessary time. We will try to do better."

Club Brugge were seen as the likely whipping boys when the draw was made but the Belgian champions are a well-run club with a proud history -- European Cup runners-up in 1978 -- and some excellent players.

For all the talk of Messi, Neymar and Mbappe - already christened the 'MNM' - for much of this game the most impressive attackers were in the blue and black stripes of the home side.

Captain Vanaken got their goal, while giant young striker Charles De Ketelaere was a constant threat and Dutchman Noa Lang regularly got in behind Achraf Hakimi on the PSG right.

"My players played a historic game. I am extremely proud. We have proven that physically we are very strong. I think we just had more motivation."

Pochettino can point to the absences of Angel di Maria and Idrissa Gana Gueye due to suspension as well as the injured Marco Verratti but his team will need to do much better in their coming European outings.

Yet their evening had started so well, with Mbappe turning Clinton Mata inside out before sending in a low ball from the left for the arriving Herrera to sweep home in the 15th minute.

Forget the superstar strikers, that was the Spanish midfielder's fourth goal in PSG's last four games.

However the home side were back level before the half-hour mark as Eduard Sobol got in behind Hakimi and cut the ball back for the unmarked Vanaken to finish.

Moments later Messi cracked a curling strike off the crossbar but Keylor Navas -- preferred to Gianluigi Donnarumma in the away goal -- was kept busy saving from a Vanaken free-kick and tipping over a De Ketelaere shot.

Mbappe then had to hobble off with a worrying ankle knock just six minutes into the second half.

PSG finished the stronger of the two sides but Mignolet boxed away Messi's shot in the 70th minute and the Argentine blazed another attempt over, as the Belgian fans celebrated the draw as though it were a victory.

Lionel Messi Ander Herrera Football
Get the latest updates on ICC T20 Worldcup 2022, check out the Schedule and Live Score. Like us on Facebook or follow us on Twitter for more sports updates. You can also download the NDTV Cricket app for Android or iOS.