Manchester United F.C. full-back Luke Shaw suffered a double fracture on his right leg as the Red Devils made their Champions League return with a 2-1 loss against PSV Eindhoven. 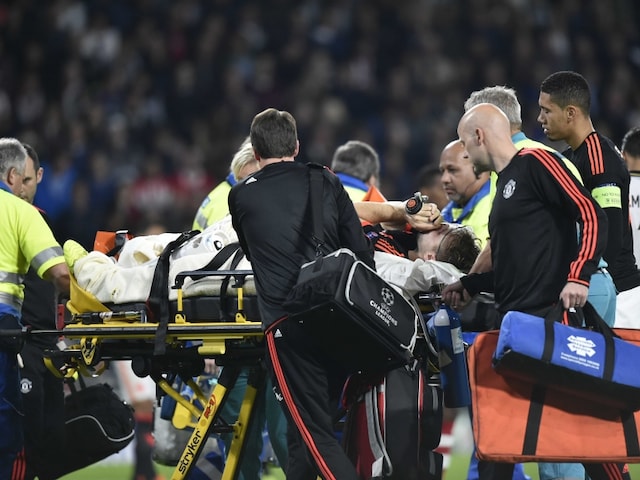 Manchester United saw their Champions League return turn into a nightmare on Tuesday as they not only fell 2-1 against PSV Eindhoven but also lost full-back Luke Shaw with a double fracture of the leg in their Group B opener. (Cristiano Ronaldo Breaks Scoring Record)

Despite an opening goal by winger Memphis Depay against his former club, United -- who dominated throughout -- failed to capitalise on their chances and goals from Hector Moreno and Luciano Narsingh gave the hosts victory.

However, worse than the defeat was the injury to Shaw, which came just 15 minutes into the match following a crunching Moreno tackle, leaving the England international with a double fracture that requires an operation when he returns to Manchester and could put his participation at Euro 2016 next summer in jeopardy.

Shaw was wheeled off the field breathing through an oxygen mask to loud applause from PSV's fans before being substituted by Marcos Rojo for his first appearance of the season.

Around half an hour later, though, Shaw took to Twitter to vow that he would make a full recovery.

"Thank you everyone for your messages, words can't describe how gutted I am, my road to recovery starts now, I will come back stronger," he tweeted.

The former Netherlands coach, who took over the reins at Old Trafford last year, saw his run of bad luck continue in the southern Dutch city with PSV tenaciously clinging on to a narrow lead for an historic win.

The 21-year-old Depay struck in the 41st minute when fellow Dutchman Daley Blind slid him in to slice past two PSV defenders and then find the back of PSV goalkeeper Jeroen Zoet's net with a crisp left-foot finish.

As promised, Depay celebrated his goal in front the fans who used to revere him, but United's fortunes were short-lived when PSV struck back just before half-time.

PSV laid their cards on the table in the second half, with right wing Luciano Narsingh heading in a beautifully-timed Lestienne cross past De Gea to find the left hand corner of the United goal.

Although Depay impressed throughout the first half, United were rail-roaded by PSV's dogged defence.

PSV's defence was up against the wall but impressed with their rigorous resistence, while United's French multi-million pound signing Anthony Martial several times failed to capitalise in front of goal.

Despite a furious United onslaught in the second half, led by Young, PSV's defensive formation held firm to open their account with maximum points.

The Philips Stadium erupted in huge celebrations at the final whistle with PSV celebrating a successful return to the competition for the first time since the 2008/09 season.

It was also PSV's first Champion's League victory over United since 2000.

Comments
Topics mentioned in this article
Luke Shaw Memphis Depay Manchester United PSV Eindhoven Football
Get the latest Cricket news, check out the India cricket schedule, Cricket live score . Like us on Facebook or follow us on Twitter for more sports updates. You can also download the NDTV Cricket app for Android or iOS.