Diego Maradona, aged 60, died on November 25 due to a heart attack. Argentine club Boca Juniors paid their tribute to their former player, and it brought his daughter Dalma to tears. 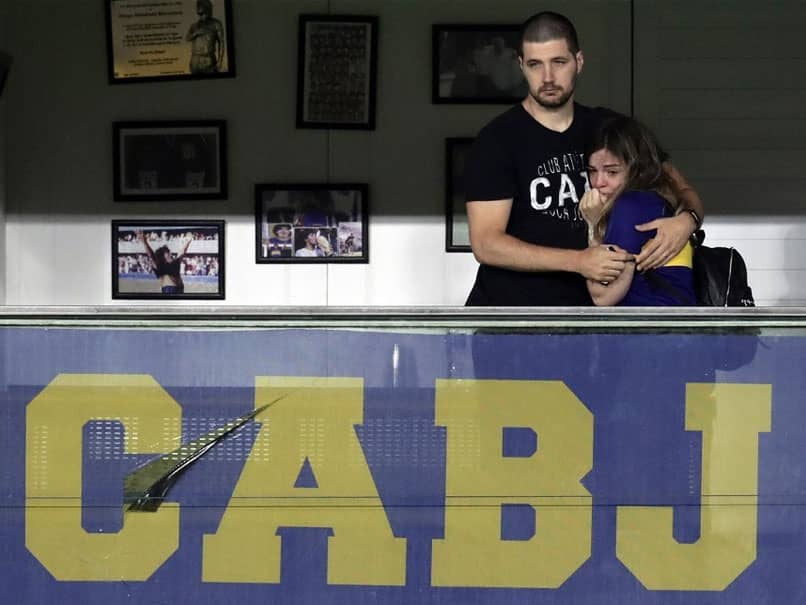 Dalma Maradona is comforted by her husband at the La Bombonera.© AFP

Diego Maradona received an emotional tribute from Boca Juniors, a club whom he represented during his glittering football career. The former Napoli player died of a heart attack on November 25, although according to reports, his surgeon is being investigated for involuntary manslaughter. On Sunday, the Argentine club faced Newell's Old Boys, another club Maradona played for. The match was part of the Copa Diego Armando Maradona, and it took place at the iconic La Bombonera. Boca won the match, 2-0, and the celebration for the first goal brought Maradona's daughter Dalma to tears. Here is the video:

Colombian midfielder Edwin Cardona opened the scoring after 12 minutes, and the Boca players celebrated by laying a Maradona jersey in front of his private suite, where his daughter was present. The celebration brought her to tears, as Boca went on to win the match, and Cardona scored again in the 20th minute.

Also, before kick-off, both sides wore the 1986 World Cup winner's name on the back of their shirts to pay their respects. At the full-time whistle, the stadium speakers played 'Live is Life', and the players once again applauded Dalma.

Considered by many to be the greatest ever footballer in history, Maradona led Argentina to World Cup glory in 1986.

During the tournament, he scored two iconic goals, which included the "Hand of God", in which he used his hand score against England. In the same match, he dribbled past several England players and scored to seal Argentina's victory in the quarter-finals. Argentina went on to defeat West Germany in the final of the tournament.

Other than Napoli, Boca and Newell's, the attacking midfielder also represented Barcelona.

Napoli Diego Maradona Football
Get the latest updates on India vs Australia Series, check out the India vs Australia Schedule for 2020-21 and Ind vs Aus live score . Like us on Facebook or follow us on Twitter for more sports updates. You can also download the NDTV Cricket app for Android or iOS.