World Cup 2014: Five Reasons for Brazil to be Cheerful About Neymar Injury

Brazil will play the World Cup 2014 without star striker Neymar but they don't have to lose hope yet. Other teams in the tournament's history have also lost players for vital matches and come through. 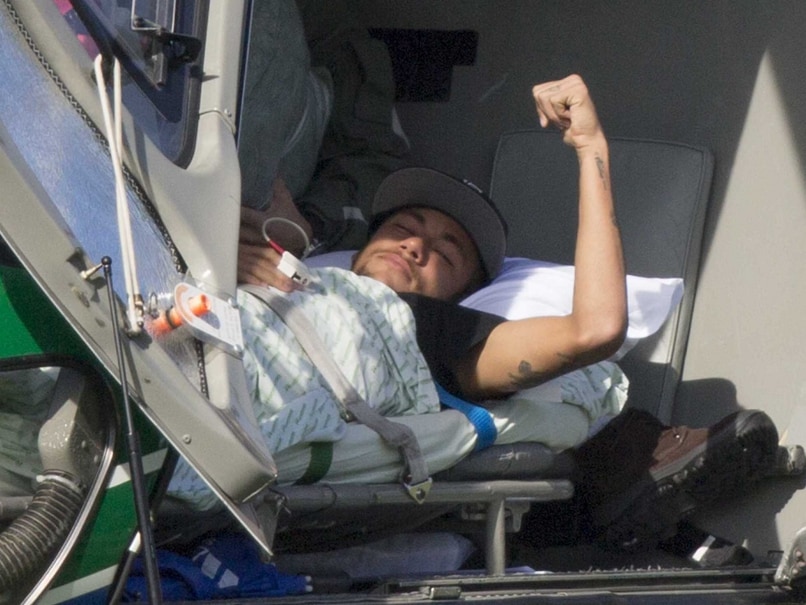 Neymar's tournament ending injury is seen as a hammerblow to Brazil's hopes of winning a sixth World Cup trophy.

However, other teams in World Cup history have also lost players for vital matches and come through. Here are the five examples. (Neymar Returns in an Ambulance)

1962 Pele - Brazil If anything can provide solace for the home fans it is this memory. Their 1970 winning captain Carlos Alberto was moved to say on Brazilian TV on Friday night: 'Remember 1962'. The defending champions looked to Pele to spearhead their title defence in Chile and all started brightly enough with the then 21-year-old scoring one and creating another in the 2-0 win over Poland but disaster struck in the following game against Czecholsovakia when he tore a leg muscle while shaping up to shoot and played no further part. Fortunately Garrincha took on the match winning role and even though he was sent off in the semi-final win over the hosts he was able to play in the final which the Selecao won 3-1 ironically against Czechoslovakia. (Hard Dose of Reality for Brazil)

1982 Giancarlo Antognoni - Italy The 28-year-old Fiorentina playmaker was in the prime form of his life and crucial to a rather unimaginative and bruising Italian side who had scraped through their group. Antognoni, though, like several of his team-mates grew in stature and confidence throughout the tournament. While Paolo Rossi's goals against Brazil and Argentina stole the headlines it was Antognoni who pulled the strings and his passing and vision struck fear into their opponents. Thus many thought Italy's hopes had been dashed when he was ruled out of the final with West Germany because of a foot injury he suffered in the semi-final with Poland. It proved to be quite the opposite as Italy cruised to a 3-1 win over the Germans with Marco Tardelli assuming the huge vacuum left by Antognoni with aplomb.

1990 Argentinian team To say Argentina -- with a bloated Diego Maradona a shadow of the player of the 1986 finals -- bludgeoned their way to the 1990 World Cup final would be an understatement. They paid a price for that with four of their players suspended for the match with West Germany including one of their more impressive performers Claudio Caniggia. The Argentinians stuck to type and had two players sent off -- while they didn't hesitate to surround the referee and jostle him with Maradona leading the pleading. Appropriately a penalty decided the game, Andreas Brehme tucking it away five minutes from time for a 1-0 win saving the world the agony of extra-time and probably several more Argentinian red cards.

1994 Mauro Tassotti/Leonardo - Italy/Brazil Tassotti has had a good World Cup unlike his compatriots as thanks to Luis Suarez's nine match international ban the former Italian defender no longer holds the record for the longest ban handed out by FIFA. The AC Milan player received an eight game suspension for breaking the nose of Spaniard Luis Enrique -- who also lost a pint of blood such was the force of the blow -- when he elbowed him off the ball in their quarter-final clash. He didn't make the final and nor did Brazilian Leonardo who copped the then second longest ban of four games for elbowing diminutive American Tab Ramos in the last 16 match and fractured his skull. "I am devastated by what happened," said Leonardo, who visited Ramos in hospital. "I watched the video later, and it looked intentional. It gives a horrible impression. But I tell you from the depths of my heart that I had no intention of hurting him." Brazil ended up winning the final on penalties after the game finished 0-0. (Neymar Carried Hopes of a Nation)

1998 Laurent Blanc - Blanc had an exemplary disciplinary record so all the better as a Trivial Pursuit question is when did he receive the one and only red card of his career? It came on home soil in the semi-final with Croatia when Slaven Bilic tumbled theatrically to the ground simulating that the mild-mannered Blanc had head-butted him. Despite the playacting FIFA refused to overturn the card and he missed the final. "For me it is a personal catastrophe," said Blanc but Bilic remained unrepentant: "I didn't get him sent off, he did". France took it in their stride without the man nicknamed 'the president' and strolled to a 3-0 win over a flat Brazil side, who had been knocked off kilter by a fit their star Ronaldo suffered hours before the game.

Comments
Topics mentioned in this article
Brazil FIFA World Cup 2014 Neymar Football
Get the latest updates on ICC Women's Cricket World Cup 2022 and IPL 2022, check out the Schedule , Live Score and IPL Points Table. Like us on Facebook or follow us on Twitter for more sports updates. You can also download the NDTV Cricket app for Android or iOS.