Semifinal Losers Will Vie for Third Place, Like It or Not

Brazil and Netherlands will clash on Saturday to decide who finishes third in the FIFA World Cup 2014. 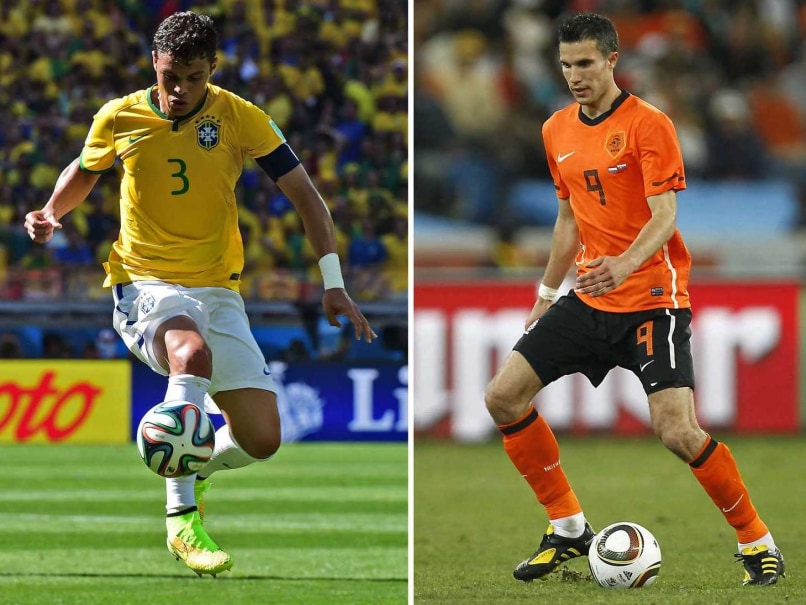 A combination of file pictures shows Netherlands' striker and captain Robin van Persie (R) controlling the ball in Durban on June 28, 2010 and Brazil's defender and captain Thiago Silva controlling the ball in Belo Horizonte on June 28, 2014. Brazil will try to rescue some of their battered pride after their humiliating World Cup semi-final defeat to Germany as they face the Netherlands in the third-place play-off in Brasilia on July 12, 2014.© AFP

Brazil lost its World Cup semifinal match to Germany by a devastating 7-1 score. The Netherlands lost its game against Argentina in a penalty shootout after 120 minutes of tense scoreless play.

After each match, the losing players wandered off the field, glassy eyed, crushed that their World Cup dreams had ended so close to the final.

The last thing any of them wanted to think about for a long time was soccer.

But their World Cup is not over. Instead, the losing semifinalists have had to haul their tired bodies and their dashed hopes to Brasilia, where they will compete one more time Saturday, for third place.

The third-place game is an oddity that many coaches, players and fans wish would fade into history. Netherlands coach Louis van Gaal minced no words about the game.

"I think that this match should never be played," he said. "The worst thing is that there is a chance you are going to lose twice in a row. And in a tournament in which you have played so marvelously well, you go home as a loser."

In the United States, third-place games are a long-forgotten anachronism. Perhaps the best-remembered ones are the consolation games at the NCAA men's basketball Final Four, which were dropped after 1981. The NCAA tournament actually had a consolation game at each regional through 1975, in case fans wanted to know which team, for instance, was the third best in the Mideast in 1964 (it was Loyola of Illinois).

The NFL hosted something called the Playoff Bowl in Miami from 1961 to 1970 to determine the league's third-best team. Vince Lombardi did not approve, calling it a "hinky-dink football game, held in a hinky-dink town, played by hinky-dink players." The Detroit Lions have not won an NFL championship since 1957, but they enjoyed three consecutive Playoff Bowl victories from 1961 to '63.

Internationally, third-place games have refused to go away.

The Olympics must hold third-place games to determine bronze medalists. But the Games carry the consolation ethos to an almost ridiculous extreme

As for the other World Cups, the cricket and rugby league tournaments have no third-place games, but the rugby union and basketball events still do. Congratulations, Australia and Lithuania: You're No. 3.

In soccer, third-place games were dropped from the European Championship and the Concacaf Gold Cup, but they remain a part of South America's Copa America and the Confederations Cup.

Van Gaal's disdain aside, the third-place games at the World Cup have occasionally brought excitement.

The first one (at the second World Cup), in 1934, finished as a 3-2 victory for Germany over Austria, setting a pattern of high scoring that continues to the present. Maybe because the stakes are low, third-place games generally have few cynical fouls, diving or, well, defense. At least three goals have been scored in all but three third-place matches.

With Brazil lining up this year, there is a chance for a memorable game. In 2002, the co-host and surprise semifinalist South Korea lost an entertaining 3-2 game to Turkey in front of 60,000-plus fans, a game that included the fastest World Cup goal, by Hakan Sukur of Turkey after only 11 seconds. Four years later, host Germany, unheralded for a change, capped a successful World Cup with a 3-1 win over Portugal.

And for statistics lovers, there have been oddities. A European team has won the third-place game at eight consecutive World Cups - a good sign for the Netherlands this year.

Brazil coach Luiz Felipe Scolari, under fire after his team's shellacking by Germany, tried to put the best face on this year's consolation game.

"Life goes on, we need to look forward to our next goal, and our next goal is to win the match for third place," he said.

But regardless of how Saturday's game turns out, the players, coaches and fans will wish they were in Rio de Janeiro on Sunday instead.

Comments
Topics mentioned in this article
Brazil Football FIFA World Cup 2014
Get the latest updates on ICC Women's Cricket World Cup 2022 and IPL 2022, check out the Schedule , Live Score and IPL Points Table. Like us on Facebook or follow us on Twitter for more sports updates. You can also download the NDTV Cricket app for Android or iOS.