Juan Camilo Zuniga has been the target of death threats and racist abuse after his foul on Neymar in the quarters of the FIFA World Cup 2014. 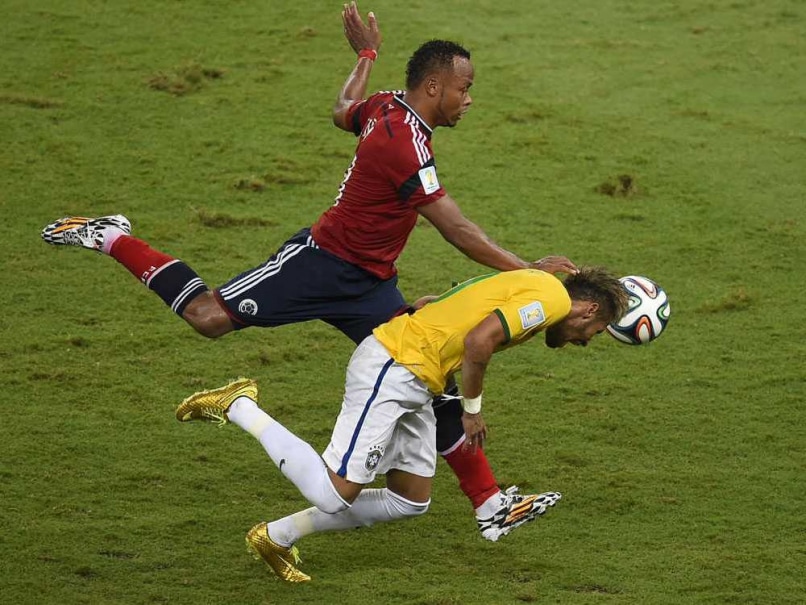 After an episode in Peru earlier this year in which Peruvian soccer fans subjected a Brazilian player to racial abuse by imitating the sounds of monkeys, President Dilma Rousseff of Brazil swiftly pledged a "World Cup against racism," declaring, "Sports should be no place for prejudice." (Zuniga a Coward: Silva)

Yet when Brazil's top player, Neymar, broke a vertebra when he was kneed in the back during a match on Friday by a Colombian player, the torrent of racist insults against the Colombian, Juan Camilo Zuniga showed how far the host of the World Cup remains from achieving that goal. (FIFA to Take no Action on Zuniga)

Expressing fury over Neymar's injury, which sidelined him for the rest of the tournament, some Brazilians took to social media, including Twitter and Instagram, to express their rage against Zuniga with racial slurs.

"It might be stunning to a lot of outsiders, but the way our Colombian brother has been treated shows yet again that Brazil is one of the world's most racist countries," said David Santos, a Franciscan friar in Sao Paulo, Brazil, who directs Educafro, an organization preparing black and low-income students for university entrance exams.

The racism expressed by many Brazilians against Zuniga points to the tension that persists in a country where prominent writers and scholars long argued that much of the prejudice and discrimination found in the segregation-era United States had been avoided. (Brazil Will Play for Neymar: Zuniga)

In recent decades, discussion over the legacies of slavery, which was abolished in Brazil in 1888, has shifted. While more than half the population of about 200 million define themselves as black or of mixed race, giving Brazil more people of African descent than any country beyond the borders of Africa, the top ranks of government and the private sector remain dominated by whites.

soccer remains an area where racism is still openly tolerated by some.

Just this year, a soccer tribunal in southern Brazil ordered a club, Esportivo, to pay a small fine and play five matches away from its stadium after its fans told a black referee, Marcio Chagas da Silva, to "return to the jungle" and smeared bananas on his car. In Sao Paulo state this year, fans shouted racist taunts at a Brazilian midfielder, Marcos Arouca da Silva.

The situation was supposed to be different during the World Cup.

Brazil's government issued stern warnings against racial insults or other discriminatory behavior during the tournament. Even before the match between Brazil and Colombia, players from both teams held aloft a banner declaring "Say No to Racism," a slogan promoted by FIFA, the organization that oversees the World Cup.

Yet Brazil's racial divide has also come into greater focus since the tournament began in June. Reflecting high ticket prices in a country where blacks still generally earn far less than whites, a poll by the Datafolha polling company suggested that fans attending games were overwhelmingly rich and white.

Ninety percent of attendees surveyed by Datafolha at a Brazil-Chile match in Belo Horizonte were in the country's top economic tier, and 67 percent were white, the poll showed. Further pointing to the country's fault lines, supporters of Rousseff, a leftist, attributed jeers against her during the World Cup's opening game to what they described as the anger of the privileged "white elite."

Beyond the racist epithets against Zuniga, a candidate for Congress in southern Brazil declared on Twitter that he should be assassinated, before apologizing. Others used expletives to insult Zuniga's family."War was almost declared on Colombia," said Antero Greco, one of Brazil's top soccer columnists, in an irony-soaked assessment of the vitriol. Pointing to the intense nature of World Cup matches and his own reading of Neymar's injury, Greco said that while Zuniga played aggressively he had not deliberately broken Neymar's back. He also reminded his readers that Neymar will recuperate.

© 2014, The New York Times News Service
Comments
Topics mentioned in this article
FIFA World Cup 2014 Brazil Neymar Football
Get the latest updates on ICC T20 Worldcup 2022, check out the Schedule and Live Score. Like us on Facebook or follow us on Twitter for more sports updates. You can also download the NDTV Cricket app for Android or iOS.