With just one day to go for FIFA World Cup, the football-crazy city of Kolkata is gearing up for the mega event in its own unique ways. 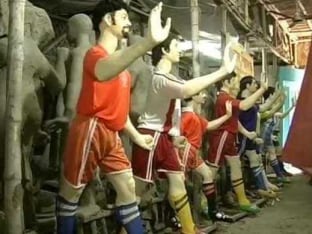 It is idol worship time in Kolkata. Idols, not of Goddess Durga yet but of the footballs stars. And making those idols is Sukumar Rudra Pal, an idol maker who has a workshop behind Hiland Park in south Kolkata. He has made idols of Messi, Ronaldo and Neymar and a host of others, all of them lifesize, about five feet tall each. (Full coverage of FIFA World Cup 2014)

Says Sukumar, "Normally I make idols of gods and goddesses all year round. But every four years, when the World Cup comes along, I concentrate on footballers. I am a fan of Argentina. For me, footballers are also god." (Pics: Seen the amazing Argentine team plane? | More incredible pics)

It has taken Sukumar more than a month at his workshop to make about 20 idols. They have been ordered by the Argentina Fan Club at Gangulybagan in south Kolkata. The idols will be put up as if on a chess board. And, as the game progresses, they will be moved closer to a giant replica of the world cup. (Also read: Brazil Races Towards Kick-Off)

Adjacent to the 'pandal' put up by the Argentina Fan Club is a lane full of Brazil fans. But even that is not going to detract from the good times.

Uttam Saha, secretary of Argentina fan club, says, "We don't fight, we all do together the area is designated. They will decorate there, we will decorate here." He is off to Brazil on the 27th, His son, Pragnan, is also an Argentine fan.

"Messi is my favourite. He is a striker. I am also a striker," he says. A Class 4 student, Pragnan has school and can't go to Brazil with his father. When not in school, his uniform is going to be blue and white, the colours of Argentina.

The Brazil supporters in the next lane are aggressive, even the women.

Mousami Das, a housewife, says, "The next few days, I am not working in the kitchen. I will be watching the matches and enjoying myself." Tanmoy Dey, another fan, says, "I support Brazil. Brazil will win. The next lane supports Argentina which doesn't matter; Brazil will win."

Durga Puja is a few months away still. Till then, Kolkata will worship at the feet of these gods, gods who may have feet of clay here but in real life, they are gods with golden boots.