Match Hospitality AG, a company appointed by World Cup organizer FIFA to sell hospitality packages that include private suites at stadiums and gourmet catering, said 59 tickets bearing Reliance Industries' name were found with the scalpers who resell tickets, usually for a hefty profit. 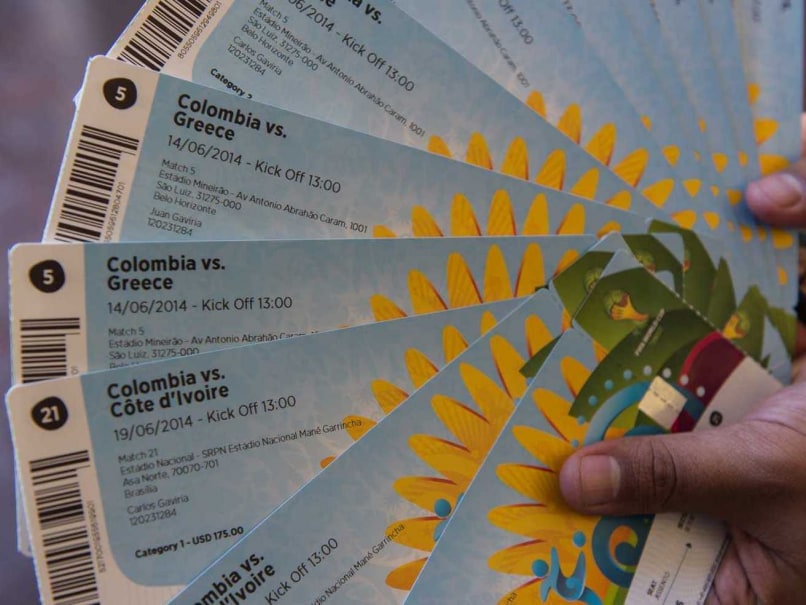 In this file picture, a football fan shows tickets he bought for the upcoming FIFA World Cup Brazil 2014 after picking them up at a designated ticketing pick-up centre at Botafogo's club in Rio de Janeiro.© AFP
Rio de Janeiro/New Delhi:

With the World Cup football tickets it had originally bought being caught in the hands of alleged scalpers, Reliance Industries on Tuesday said it is investigating how the much-coveted and expensive tickets ended up in the Brazilian black market. (FIFA Official Released)

"We at Reliance always comply with all rules and regulations and are unaware of any such incident. We are investigating the same," the company spokesperson said.

RIL, controlled by India's richest man Mukesh Ambani, said it had bought the tickets through another company.

"Octagon works with FIFA and their sponsors. We have appointed them as our agents to buy some hospitality packages.

They have been handling the tickets and the packages," the spokesperson said.

RIL had bought a total of 304 packages for 19 matches worth USD 1.2 million, including access to a private suite for all games in Rio, Sao Paulo and Belo Horizonte, Match Hospitality said.

As part of the purchase agreement, Match said, RIL had agreed to "a strict prohibition to resale" any of the packages.

Rio state police on Monday said they had arrested the head of Match Hospitality, Raymond Whelan, accusing him of aiding scalpers who illegally resold World Cup tickets worth an estimated USD 100 million.

The Swiss agency, Match Hospitality said it blocked semifinal and final packages bought by RIL and two other companies.

In the statement, it said tickets acquired by RIL, Jet Set Sports and Pamodzi Sports were suspended "pending further investigations" after entries containing their names were seized by police.

It didn't specify how many of the tickets were for the semifinals and final. The semifinals start tomorrow when Brazil plays Germany in Belo Horizonte. Argentina faces the Netherlands the following day. The final is on July 13 in Rio de Janeiro.

Comments
Topics mentioned in this article
FIFA World Cup 2014 FIFA Football
Get the latest updates on ICC Women's Cricket World Cup 2022 and IPL 2022, check out the Schedule , Live Score and IPL Points Table. Like us on Facebook or follow us on Twitter for more sports updates. You can also download the NDTV Cricket app for Android or iOS.