Though Harry Kane scored twice, Son was the star of the show, scoring one goal and having a say in four others 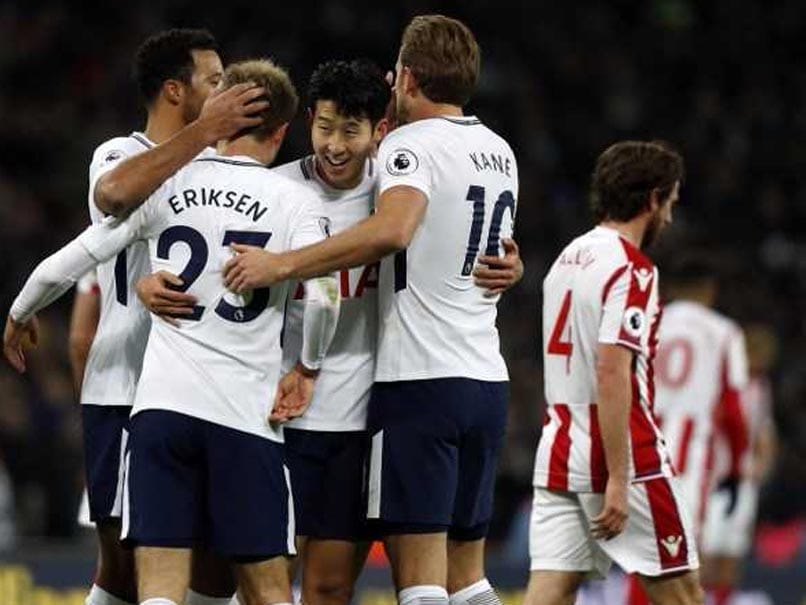 With this win Tottenham Hotspur provisionally climbed to fifth place in the Premier League table.© AFP

South Korean forward Son Heung-Min sparkled as Tottenham Hotspur returned to winning ways in style by crushing sorry Stoke City 5-1 at Wembley on Saturday. After a four-game winless streak in the Premier League, Tottenham took their frustrations out on a poor Stoke side to provisionally climb to fifth place in the table. Though Harry Kane scored twice, Son was the star of the show, scoring one goal and having a say in four others. An own goal from Ryan Shawcross set Spurs on the way, with Christian Eriksen also weighing in as Stoke, who grabbed a late consolation via Shawcross, were taken to the cleaners.

Mark Hughes's Stoke, who have their lowest points tally at this stage of a Premier League season, sought to pack their defence in an effort to frustrate the hosts.

But they quickly had to change tack as Spurs made the breakthrough with 20 minutes played.

Son, who had already threatened Jack Butland's goal, made a telling contribution, with Shawcross ultimately putting the ball into his own net.

Son's cross deflected off Kurt Zouma and Shawcross, with Kane in close attention, could only divert the ball beyond Butland.

The luckless Shawcross became the seventh player to score six or more own goals in the Premier League era.

Son almost extended his side's lead three minutes later with what would have been another goal of Stoke's own making.

A corner routine by the visitors backfired and Son burst away on a 40-yard run, ignoring Eriksen's cries for a pass, but could not find his way beyond Butland.

Butland was forced into another save to keep out Eriksen's 28th-minute free-kick and then had to repel a thunderous shot from Mousa Dembele.

It was all Spurs and they should have been out of sight, with Kane the next guilty party.

Son threaded the ball through and Kane beat Stoke's offside trap, only to fire his low shot the wrong side of the post.

Within eight minutes of kick-off in the second half, Son showed Kane how it was done with a cool finish.

Dele Alli's pass sent him scampering through and he outpaced the defence to score.

Stoke must have feared the worst and Kane ensured the game was well and truly beyond them just 60 seconds later.

Ben Davies sent in a deep cross from the left and Kane rose highest to head through Butland's legs.

Stoke had barely threatened, but a rare sight of goal saw them foiled by Tottenham goalkeeper Hugo Lloris.

Xherdan Shaqiri bore down on goal, but his low shot was pushed out by Lloris, with Eric Dier on hand to clear the danger.

It was brief respite for Stoke as Kane once again demonstrated why he is the country's finest striker with a fourth goal for Mauricio Pochettino's team.

Son diverted Eriksen's cross into his path and Kane swept home left-footed from 18 yards out to pile on the misery for the shell-shocked visitors.

Stoke just wanted the final whistle to put them out of their agony, but their woes would continue as Eriksen got in on the act in the 74th minute.

Another quick break saw Son free the Dane, who never looked like missing.

Stoke would have the last say when Shawcross headed in at the right end after Lloris missed Darren Fletcher's 80th-minute corner. His muted celebration told its own story.

Comments
Topics mentioned in this article
Tottenham Hotspur Stoke City Harry Kane English Premier League Football
Get the latest updates on ICC T20 Worldcup 2022 and CWG 2022 check out the Schedule, Live Score and Medals Tally. Like us on Facebook or follow us on Twitter for more sports updates. You can also download the NDTV Cricket app for Android or iOS.