Marko Arnautovic exchanged passes with Manuel Lanzini before wrong-footing Cesar Azpilicueta and placing the ball beyond Thibaut Courtois with his left foot. 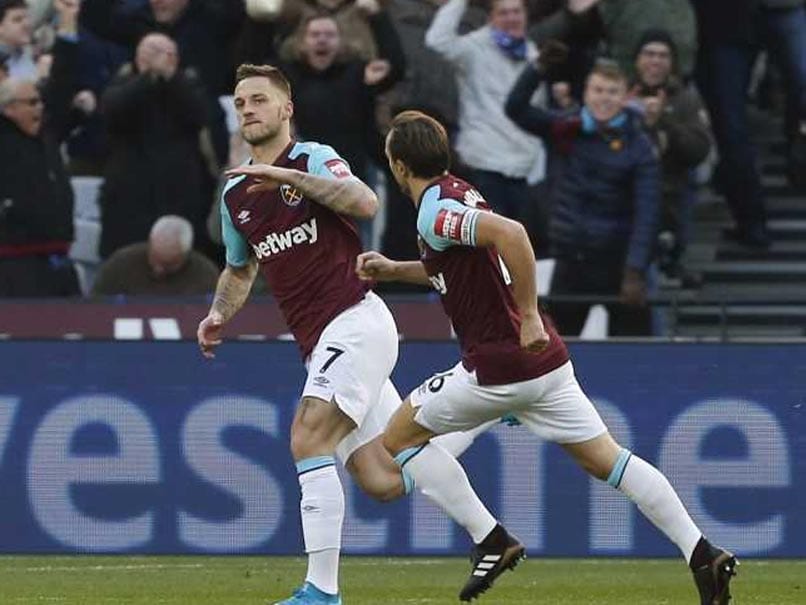 David Moyes claimed his first win as West Ham United manager after Marko Arnautovic's goal gave the Premier League strugglers a shock 1-0 win over champions Chelsea on Saturday. Arnautovic, the Hammers' 24 million pounds (USD 32.1 million, 27.3 million euros) record signing, struck in the sixth minute to earn Moyes his first win in his fifth game since succeeding Slaven Bilic. While the Austrian's neat strike boosted his side's hopes of climbing out of the bottom three, it dealt a severe blow to Chelsea's hopes of defending their title.

A victory would have moved Antonio Conte's side level on points with second-place Manchester United and closed the gap to leaders Manchester City to eight points, 24 hours before the top two meet at Old Trafford.

Instead, Chelsea head coach Conte will now watch that game knowing his side could lose yet more ground in the title race.

The Italian was left frustrated by his team's under-par display, which was summed up by a late miss from top scorer Alvaro Morata.

For Moyes, the win confirmed West Ham's steady progress since he took charge and justified his team selection, including the decision to stick with goalkeeper Adrian and not recall England international Joe Hart.

The Hammers manager also opted to start without a recognised striker, with Andy Carroll, Javier Hernandez, Andre Ayew and Diafra Sakho held back on the bench.

Instead, Moyes asked Michail Antonio to fill the lone forward role and the move had the desired effect as the hard-working home side went ahead via Arnautovic's early strike.

Last weekend's narrow defeat at Manchester City appeared to have instilled confidence in Moyes's side, who demonstrated no fear in taking the game to Chelsea.

That belief was summed up in the way they carved open the visitors' defence to force the breakthrough.

Arnautovic exchanged passes with Manuel Lanzini before wrong-footing Cesar Azpilicueta and placing the ball beyond Thibaut Courtois with his left foot.

Chelsea had rallied to beat Newcastle United last weekend after falling behind, but their response this time was less convincing.

Even Eden Hazard showed signs of being off the pace when he pulled a close-range volley across the face of goal.

Conte's men, who had missed out on the chance to top their Champions League group after failing to beat Atletico Madrid at Stamford Bridge in mid-week, lacked their usual zip.

While Adrian was obliged to save sighters from N'Golo Kante and Davide Zappacosta, Chelsea struggled to create enough clear openings during the first half.

Hazard had this week been told by Conte he must show the level of hunger demonstrated by Cristiano Ronaldo and Lionel Messi if the Belgian is to challenge for the Ballon d'Or.

But the former Lille player failed to show anything like his best during the opening 45 minutes at the London Stadium.

Morata was also ineffective and Conte reacted to a disappointing first half by introducing Pedro for Tiemoue Bakayoko in an attempt to provide the former Real Madrid striker with more support.

The initial signs were positive for the visitors, although they could have fallen further behind had referee Anthony Taylor taken a different view of a handball incident nine minutes after the break.

The ball struck Andreas Christensen's hand as Arnautovic, who produced his best performance in a West Ham shirt, attempted to cut inside the Dane on the edge of the Chelsea box.

To the Chelsea defender's relief, Taylor viewed the contact as accidental.

Chelsea stepped up the pressure in the latter stages, but Morata's 83rd-minute miss summed up their day, the Spain striker lashing wastefully wide of the near post from Kante's pass.

Comments
Topics mentioned in this article
Chelsea West Ham United Marko Arnautovic English Premier League Football
Get the latest updates on India vs South Africa and check out  Schedule, Results and Live Score. Like us on Facebook or follow us on Twitter for more sports updates. You can also download the NDTV Cricket app for Android or iOS.