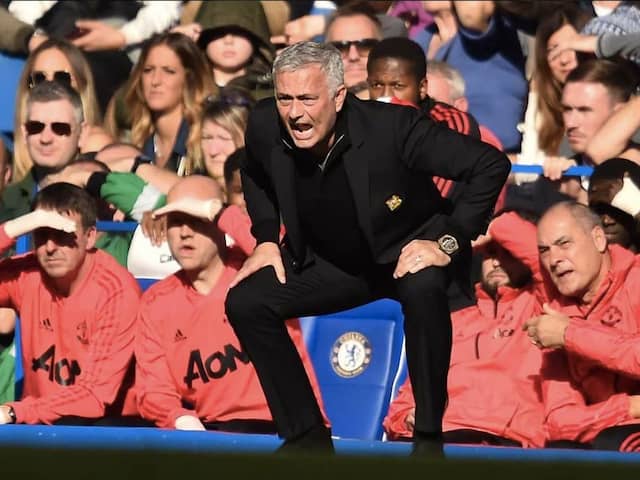 Jose Mourinho lost his cool at a Chelsea backroom staff who ran past him.© AFP

Jose Mourinho lost his cool at a Chelsea backroom staff who ran past the Manchester United manager to celebrate The Blues' stunning equaliser during the injury time of the top-billing Premier League clash at Stamford Bridge. The incident took place in the 96th minute of the game when Ross Barkley scored to help the London club maintain an unbeaten run. The match between the two Premier League giants eventually ended in a 2-2 draw with Antonio Rudiger scoring the first goal for the home side while Anthony Martial (55th, 73rd minutes) scored a brace for the away side.

Soon after the spat, the video started doing the rounds on Twitter, showing the Chelsea backroom staff celebrating the equaliser around Jose Mourinho.

Mourinho was seen sitting comfortably on the bench minutes before the bust-up happened.

It doesn't matter what you think about Jose Mourinho this chelsea staff member is a disgrace pic.twitter.com/BaVxLmp4ec

When asked about the incident, former Chelsea boss Mourinho said: "Oh come on, I can tell you that 97 minutes of the game was so good that you have to focus on that.

"I did not get respect back from Chelsea (fans) but that is not my responsibility. What I did here today I will do in Madrid, in Milan, in Porto, the reaction from the fans is not up to me.

"I am not annoyed with anything. What happened with (Maurizio) Sarri's assistant, Sarri was the first one to come to me and say he will resolve it.

"The assistant has already come to me and apologised, I told him to forget it. I have made a lot of mistakes in my career."

Manchester United will next face Italian football giants Juventus in the Champions League fixture on October 23.

Chelsea English Premier League Chelsea vs Manchester United, Game week 9 Football
Get the latest Cricket news, check out the India cricket schedule, Cricket live score . Like us on Facebook or follow us on Twitter for more sports updates. You can also download the NDTV Cricket app for Android or iOS.