Jose Mourinho pointed to the precedents for Chelsea being crowned champions in seasons when Eden Hazard is at his best. 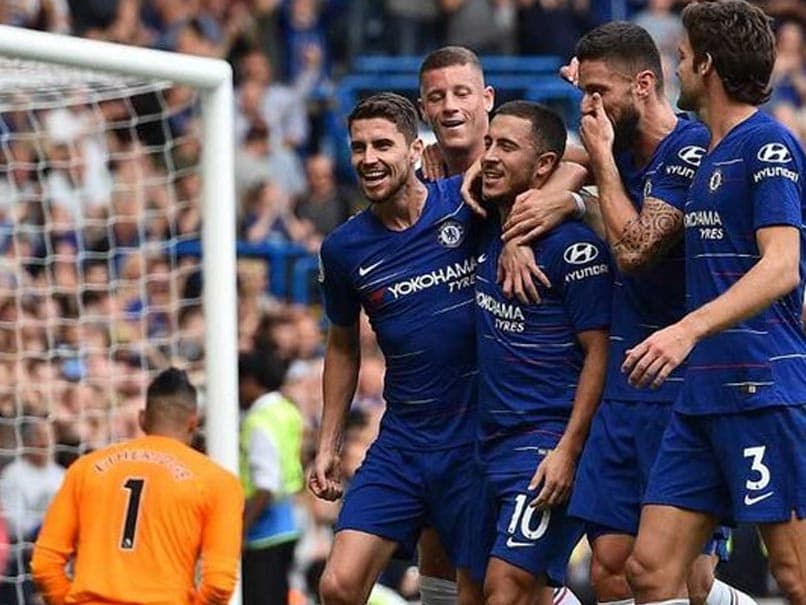 Eden Hazard has been brilliant this season, scoring eight goals in 10 appearances for Chelsea.© AFP

Jose Mourinho believes former club Chelsea can win this season's Premier League title if Eden Hazard maintains his form as the English game's best player. Ahead of his return to Stamford Bridge on Saturday, the Manchester United manager pointed to the precedents for Chelsea being crowned champions in seasons when Hazard is at his best. The Belgian led Chelsea to the title under Mourinho in 2014/15 and with Antonio Conte in charge in 2016/17. Hazard has started this season in similar form with eight goals in 10 appearances in an unbeaten start for new boss Maurizio Sarri to sit joint top of the Premier League alongside Manchester City and Liverpool - seven points clear of Mourinho's United.

"Very good results, top of the league and, of course, lots of good players but history says that when Eden Hazard is the best player of the Premier League, Chelsea is the champion," said Mourinho on Friday.

"It happened with me and Antonio, and this season, it is still the beginning of course, but he is the best player of the Premier League until now.

"Chelsea is top of the league because he is the kind of player who can make a huge difference."

Hazard and Mourinho didn't end on the best of terms when the Portuguese was sacked from his second spell at Stamford Bridge in December 2015 with Chelsea languishing in 16th and Hazard having failed to score a Premier League goal all season to that point.

However, in a recent interview Hazard spoke of his respect for Mourinho and his desire to play for his former manager again.

Mourinho doesn't believe that will happen, but insists the two had a good relationship.

"I would love to have him in Manchester United but I don't think Chelsea will sell him to Man United," added Mourinho.

"Chelsea is led by intelligent and experienced people in football and they would never sell Eden to Man United so there's no point to comment.

Few nice things have been said about Mourinho this season, at least by former United players in the media who have led calls for him to be replaced.

Legendary former midfielder Paul Scholes has been most vocal in his criticism of Mourinho and his style of football imposed on the Reds.

A thrilling comeback from 2-0 down to beat Newcastle 3-2 two weeks ago provided an example of how exciting the current United team can be when unshackled. But Mourinho again staunchly defended his approach.

"I want the ball and you can only recover the ball if your opponent loses it or if you provoke a mistake in your opponent. For all that you need to defend.

"When you have the ball, you can play a different way and normally adapted to the qualities of your players. That (style) is what I want."

Manchester United Eden Hazard English Premier League Jose Mourinho Football
Get the latest updates on Fifa Worldcup 2022 and check out  Fifa World Cup Schedule, Stats and Live Cricket Score. Like us on Facebook or follow us on Twitter for more sports updates. You can also download the NDTV Cricket app for Android or iOS.