Manuel Pellegrini insisted a series of major decisions went against Manchester City F.C. at the Emirates Stadium, claiming there were fouls in the build-up to both Arsenal goals. 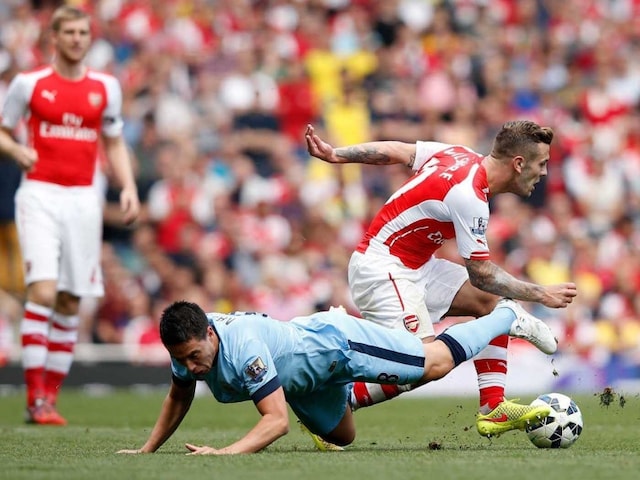 Manuel Pellegrini accused referee Mark Clattenburg of costing his Manchester City side victory following a 2-2 draw away to Arsenal on Saturday.

Pellegrini insisted a series of major decisions went against the Premier League champions at the Emirates Stadium, claiming there were fouls in the build-up to both Arsenal goals.

The Chilean added visitors City were denied a clear penalty when the ball struck the hand of Arsenal midfielder Jack Wilshere.

And the manager also compared Clattenburg's performance to his display in City's 3-2 defeat at Liverpool last April when Pellegrini again condemned the referee's decision-making.

"I think that both Arsenal goals were very clear fouls -- for the first one, it was two or three fouls continuous fouls on Sergio Aguero and the second one Danny Welbeck pushed Vincent Kompany with no intention of playing the ball and then it was a goal," Pellegrini said.

"The only other doubt is that we were denied a clear penalty for a handball.

"Last season, it was Martin Skrtel with a fist for Liverpool in the six-yard box and today (Saturday) it was Jack Wilshere with two hands on the ball inside the box right in front of the linesman and no penalty is given.

"He (Clattenburg) had a very bad game, he had a bad day today and he had another against Liverpool last season.

"Arsenal scored both goals with fouls. Of course he (Clattenburg) cost us victory."

Aguero put City ahead midway through the first half but Arsenal recovered with goals from Wilshere in the 64th minute and Alexis Sanchez ten minutes later before Martin Demichelis levelled six minutes from time.

Both teams start their Champions League group campaigns this week, with City at Bayern Munich and Arsenal travelling to Borussia Dortmund.

Pellegrini revealed he rested Yaya Toure after the midfielder returned from international duty with Ivory Coast in anticipation of City's trip to Germany.

"Yaya arrived on Friday after a long trip and we have another difficult game on Wednesday and I don't think we have a problem replacing him with the players that played today."

"Debuchy has a badly sprained ankle, for how long he will be out we don't know. But it doesn't look too good. They need more time to assess but it's a bad sprain," Wenger said.

"Calum Chambers was always going to play in Dortmund anyway because Debuchy is suspended for that game," the Frenchman added.

Welbeck was unable to mark his first appearance with a goal, hitting the post with an early chance, and Wenger admitted it would take time for the forward to bed in.

"He did well. I believe he needs to build up his link play with our players but that is normal.

"It was sad that he couldn't take his chance but every time he had an opportunity to develop his pace, he looked dangerous.

"There were some things he needs to work on to integrate with our game but he looks dangerous."

But Wenger added he had no concerns about England international Wilshere, whom he believes is back to his best after a frustrating run of injuries during the last two seasons.

"Jack is coming back physically to his level where he can be but it takes time to find that little fraction of a second where you can make a difference," Wenger said.

"And it's so important in the modern game where you can get away from people and win the ball. And it looks today (Saturday) that he found it on a consistent level over 90 minutes."

Comments
Topics mentioned in this article
Jack Wilshere Sergio Aguero Manchester City Arsenal English Premier League Football
Get the latest Cricket news, check out the India cricket schedule, Cricket live score . Like us on Facebook or follow us on Twitter for more sports updates. You can also download the NDTV Cricket app for Android or iOS.