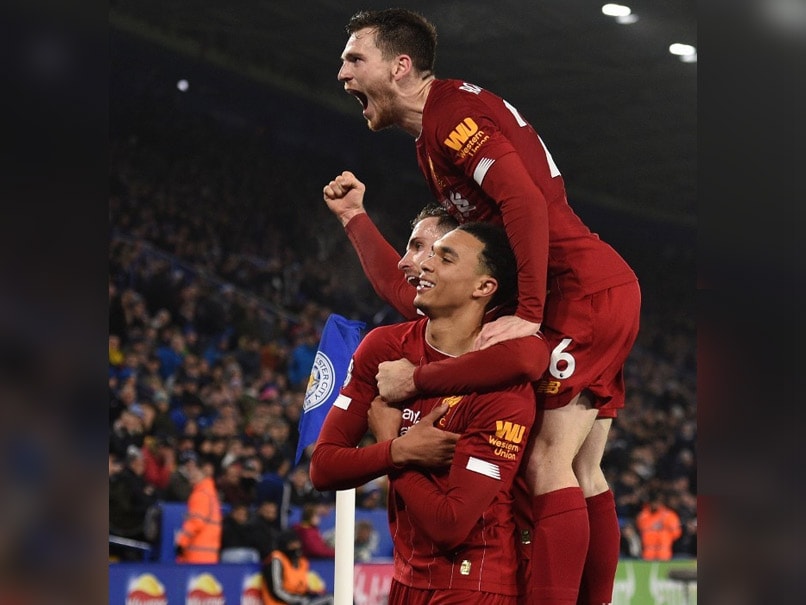 Jurgen Klopp insisted it is not yet party time for Liverpool despite tightening their grip on the Premier League title race with a dominant 4-0 thrashing of second-placed Leicester City to open up a 13-point lead at the top of the table. Roberto Firmino scored twice from Trent Alexander-Arnold crosses either side of James Milner's penalty before the brilliant Alexander-Arnold rounded off the scoring himself. Liverpool also have a game in hand over Leicester and seem destined to finally end a 30-year wait to win the title. "With all the things around us, the biggest quality of my boys is that we are not listening really, we are completely focused on what we have to do," Jurgen Klopp told Amazon Prime.

"I'm really good at partying my friends will tell you, but I never wanted to have a party without a reason.

"If there is something to celebrate I will tell you, until then we will work."

Fresh from winning the Club World Cup for the first time in Qatar on Saturday, Klopp's men showed no sign of fatigue from a congested December schedule as they outclassed the Foxes from start to finish.

Alexander-Arnold was a constant threat rampaging forward from right-back and stung Kasper Schmeichel's palms inside the first minute before Klopp soon had his head in his hands when Sadio Mane somehow spooned Mohamed Salah's dangerous cross wide.

An opener for the runaway league leaders was only a matter of time and duly arrived just after the half hour mark when Alexander-Arnold's cross was headed powerfully down past Schmeichel.

The Danish goalkeeper had ensured Leicester's 3-1 defeat at Manchester City on Saturday was not far more comprehensive and needed to be at his best again to keep the Foxes in the game as he saved one-on-one from Mane moments later.

Two heavy defeats in five days have proved to be a reality check for Leicester's title ambitions with their focus now on making sure they hold off a chasing pack including Chelsea, Tottenham and Manchester United to secure a return to the Champions League.

"It's important there is a little bit of perspective," said Schmeichel. "If you told us we would be in the position we are at the start of the season we would have taken it.

Liverpool, by contrast, demonstrated why they are Champions League winners and Premier League champions in waiting.

Klopp's men finally had the breathing space they desired via the arm of Caglar Soyuncu as he handled Alexander-Arnold's corner 20 minutes from time.

Milner had only been on the field a matter of seconds and stroked home the penalty with his first touch.

Three minutes later, Firmino doubled his tally of goals and Alexander-Arnold added a third assist with a driven low cross that the Brazilian expertly cushioned before slotting into the top corner.

Alexander-Arnold then capped a magnificent performance by blasting low and hard beyond Schmeichel into the bottom corner.

The Boxing Day card marks the halfway point of the Premier League season, but even with half the season to play, Liverpool's march towards the title looks unstoppable.

"It is theirs to lose," added Schmeichel.

Manchester City English Premier League Football
Get the latest updates on IPL Auction 2023 and check out  IPL 2023 and Live Cricket Score. Like us on Facebook or follow us on Twitter for more sports updates. You can also download the NDTV Cricket app for Android or iOS.