Juan Mata collected two yellow cards in just 158 seconds at West Brom, as Manchester United F.C. were left to play with only ten men for over an hour. 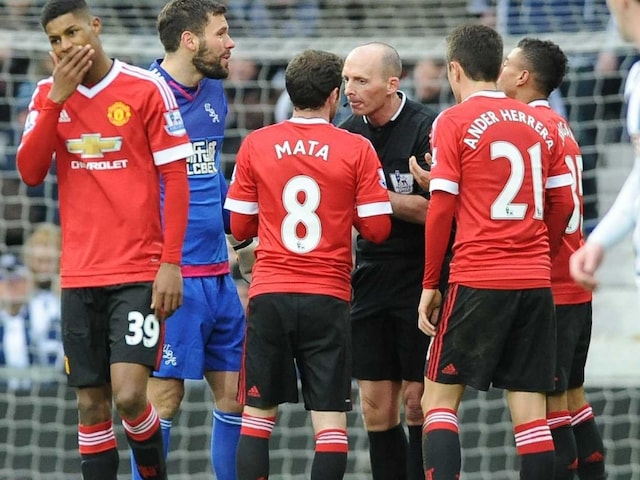 Juan Mata was shown his first yellow for needlessly blocking a Darren Fletcher free-kick, and was sent off for a late tackle on the former Manchester United F.C. midfielder.© AP
London:

Juan Mata apologised to Manchester United fans on Monday after the first red card of his career proved costly in a 1-0 defeat at West Brom on Sunday.

The Spaniard collected two yellow cards in just 158 seconds at the Hawthorns, as United were left to play with only ten men for over an hour.

Mata was shown his first yellow for needlessly blocking a Darren Fletcher free-kick, and was sent off for a late tackle on the former United midfielder.

Louis van Gaal's men are now three points behind fourth-placed Manchester City in the race for the Champions League, who also have a game in hand.

Their best chance of qualifying for Europe's premier competition now looks to be by winning the Europa League.

They play Liverpool for the first time in Europe in the last 16 of that competition on Thursday, with Mata set to play as his ban only covers domestic football.

"After almost 500 games as a professional player, this Sunday I was sent off for the first time in my career. As you can imagine, it's not easy for me to write these lines," Spain midfielder Mata wrote on his blog.

"The truth is this is a new and strange situation for me, not easy to assimilate, but we learn from everything. I know that, in football, we see things like these every week, but obviously what hurts more is that my team-mates had to fight with 10 men for a long time.

"I have the feeling that both decisions were rigorous; that, in many occasions, we see more serious fouls that are not penalised in such a way, but at the same time I could have avoided them and I take responsibility.

"It also leaves me with a bad taste for the supporters who travelled to the stadium, and for those who were watching the game from home, but I must carry on as always and from now on I'm already focused on the next game, the derby against Liverpool in the Europa League."

Comments
Topics mentioned in this article
Juan Mata Manchester United West Bromwich Albion English Premier League Football
Get the latest Cricket news, check out the India cricket schedule, Cricket live score . Like us on Facebook or follow us on Twitter for more sports updates. You can also download the NDTV Cricket app for Android or iOS.