Emmanuel Adebayor made a nightmare return to the Emirates Stadium on Saturday, his 18th-minute dismissal proving decisive as Arsenal cruised to a 5-2 win over Tottenham Hotspur in the north London derby. 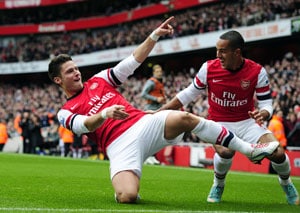 Emmanuel Adebayor made a nightmare return to the Emirates Stadium on Saturday, his 18th-minute dismissal proving decisive as Arsenal cruised to a 5-2 win over Tottenham Hotspur in the north London derby.

The former Arsenal forward had already fired his side into a 10th-minute lead when he jumped in on Gunners midfielder Santi Cazorla to earn a straight red card.

That transformed the game, with Arsenal establishing a two-goal half-time lead through Per Mertesacker, Lukas Podolski and Olivier Giroud.

Cazorla and Theo Walcott added to the tally after the break, with Gareth Bale claiming one back for the visitors.

The result provided a timely boost for Arsenal manager Arsene Wenger, who has come in for growing criticism following a string of inconsistent performances.

For Tottenham manager Andre Villas-Boas, there was only frustration, as he suffered an embarrassing reverse in his first experience of this local derby.

Villas-Boas had admitted in the build-up to the game that Tottenham would attempt to exploit Arsenal's recent frailties at home, when nerves appeared to have affected Wenger's side.

The Spurs manager's decision to pair Jermain Defoe and Adebayor up front for the first time in the Premier League this season confirmed the visitors' intention to take the game to Arsenal.

And for the 17 minutes prior to Adebayor's dismissal, the plan worked perfectly.

Mertesacker and Bacary Sagna were both caught sleeping as Defoe beat the offside trap before firing in a left-foot shot that Wojciech Szczesny could only palm into the path of Adebayor, who finished from four yards out.

It was the ideal start for the striker, but did nothing to calm him and eight minutes later, referee Howard Webb brandished a straight red card after he lunged in foolishly at Cazorla with his studs showing.

The momentum of the game shifted completely, with Tottenham immediately forced onto the back foot as Arsenal made the most of being handed an unexpected route back into the game.

It took the home side just seven minutes to level, with Mertesacker making up for his earlier error by heading home Theo Walcott's right-wing cross.

This time it was the Spurs defence that was all at sea, with Gallas guilty of allowing the Germany centre-back to rise unchallenged.

That set the pattern for the remainder of the first half, when only goalkeeper Hugo Lloris kept Tottenham in contention. 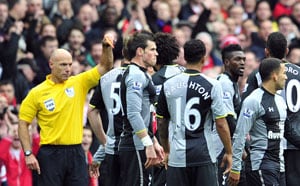 But the Spurs defences were breached again two minutes before the break when Podolski cleverly used Mikel Arteta's run as a decoy before turning and shooting beyond Lloris with the help of a deflection off Gallas.

Then, seconds before the interval, Arsenal well and truly took control when Giroud turned home Cazorla's left-wing cross at the near post.

Villas-Boas made two changes at half-time and switched to a back three in an effort to restore his side's attacking threat.

But it was Arsenal who soon established their dominance once again and when Cazorla made 4-1 on the hour, it was impossible to see a way back for the visitors.

Walcott and Podolski combined on the left before the German drilled in a low cross that found Cazorla unmarked at the far post.

Bale pulled one back for Tottenham in the 71st minute when he cut in from the left and struck right-footed, but Walcott completed the win in added time after being set up by substitute Alex Oxlade-Chamberlain.