Alex Ferguson expects Ryan Giggs to stay on at United

Manchester United manager says that Giggs will stay for another year and that his game has not weakened. 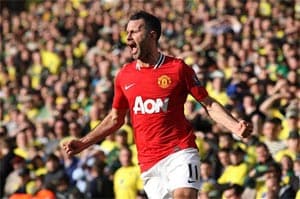 Manchester United manager Alex Ferguson expects Ryan Giggs to remain at the club for another season, taking the midfielder's one-team career into his 40s.

Ferguson says "he will play for another year ... there are no discerning signs of tiredness or weakness in his game."

The 39-year-old Giggs produced an impressive display in United's 1-0 win over West Ham in Wednesday's third-round replay in the FA Cup at Old Trafford, quieting doubters who have criticized recent performances.

Ferguson says "his quality is still there and he has fantastic balance. He has the appetite for it and he is just an incredible human being."