England vs India: KL Rahul received a big round of applause from his teammates inside the dressing room after his batting masterclass at Lord's put India on top in the second Test. 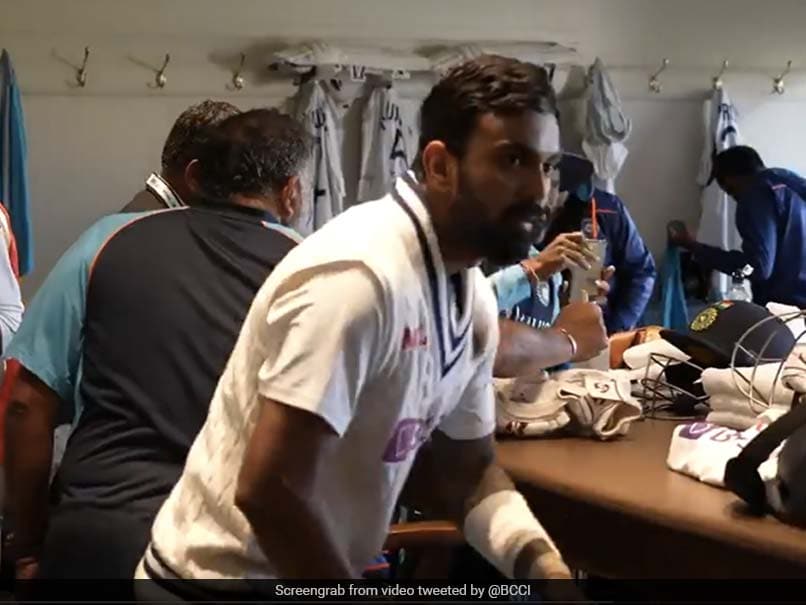 KL Rahul received a warm welcome in the dressing room after his batting heroics at Lord's.© Twitter

KL Rahul scored an unbeaten centuryat the Lord's cricket ground on Thursday to put India on top in the second Test against England. KL Rahul put on a batting masterclass in an innings that was laced with 12 boundaries and a maximum. After Stumps on the first day of the Lord's Test, the India opener received a hero's welcome from his teammates. The Board of Control for Cricket in India (BCCI) took to Twitter share a snippet of the "dressing room scenes" after Rahul returned to the pavilion unbeaten on 127.

"Scenes as @klrahul11 returns to the dressing room after his brilliant 127* on Day 1 of the Lord's Test," the video was captioned.

Scenes as @klrahul11 returns to the dressing room after his brilliant * on Day 1 of the Lord's Test. #TeamIndia #ENGvIND pic.twitter.com/vY8dN3lU0y

In the video, Rahul was first welcomed by his opening partner Rohit Sharma who gave him a hug.

On his way to the dressing room, Rahul was congratulated in the long room by his statemate Mayank Agarwal.

In the dressing room, head coach Ravi Shastri, Ravichandran Ashwin and others all gave Rahul a pat on the back for his outstanding knock in testing conditions.

Thanks to Rahul's heroics, India finished the day at 276 for three after being put into bat by England skipper Joe Root.

Rahul along with Rohit put on a 100-plus stand for the opening wicket.

Cheteshwar Pujara failed to get a big score in as he was dismissed by James Anderson for nine.

Virat Kohli looked good during his knock of 42 but failed to convert the start he got as he edged one to Root off Ollie Robinson.

KL Rahul Rohit Sharma Ravi Shastri England vs India, 2021 Cricket
Get the latest updates on ICC T20 Worldcup 2022 and CWG 2022 check out the Schedule, Live Score and Medals Tally. Like us on Facebook or follow us on Twitter for more sports updates. You can also download the NDTV Cricket app for Android or iOS.