England vs India: Cheteshwar Pujara "Should Be Left Alone" To Figure Out His Drawbacks, Says Virat Kohli

England vs India: Virat Kohli backed Cheteshwar Pujara ahead of the Test series against England and said it is up to him to figure out his "drawbacks". 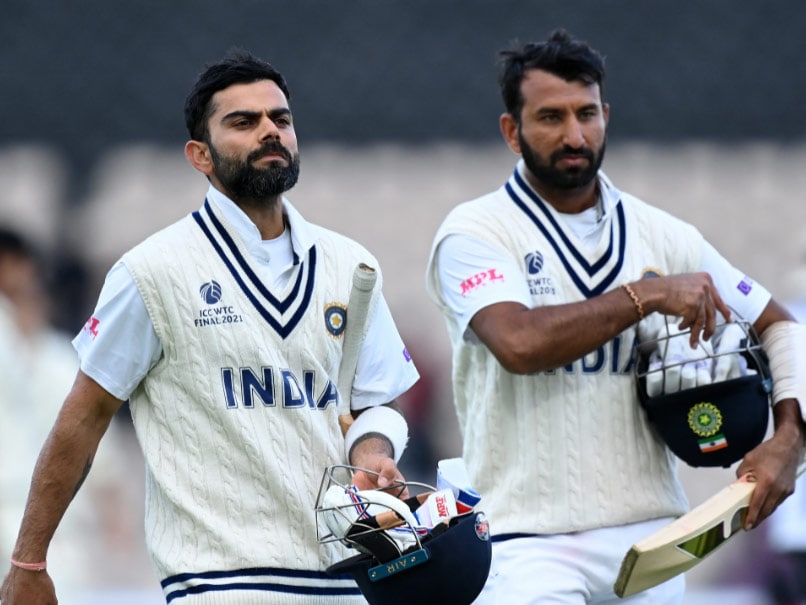 India captain Virat Kohli wants critics of Cheteshwar Pujara's batting to leave him alone as he strongly believes that it is up to individuals to figure out the "drawbacks" in their game. Pujara is India's second highest Test run-getter in the current team after skipper Kohli with 6000 plus runs (6267) in 86 matches but has often been accused of playing an ultra-defensive game which increases pressure on batsmen who follow. Asked about Pujara baiters, Kohli did come to his dependable No 3's defence albeit with a rider.

"It's been going on for a while and I honestly feel a player of his calibre and experience should be left alone and it should be absolutely with the individual to figure out what are the drawbacks in his game," Kohli said on the eve of the first Test against England starting Wednesday.

The captain said that players at this level are aware of their responsibilities and undue criticism doesn't bother them, least of all Pujara.

"Similarly with me or any other player in this team, we are very aware of the things we need to do for the benefit of the team. I can from outside say criticism is unnecessary but I know for a fact that Pujara doesn't care and criticism is as relevant as you want it to be.

"People can say what they want to say on the outside and those are just words at the end of the day. If you feel they mean no value to you, you just carry on, walking on your path."

While he predictably didn't divulge the playing XI and whether KL Rahul or Hanuma Vihari will open the innings, he did say that Shardul Thakur has potential to become an all-rounder across formats.

"Yes, he can definitely be created (into an all-rounder). He already is a multi dimensional cricketer and it's all about him getting more and more confidence... someone like him brings a lot of balance to the Test team or for that matter any format of the game.

"Hardik has done that so far in the past and he is getting back on track to bowling regularly. These kind of cricketers help the team in massive massive way and Shardul is a huge prospect for us.

"Someone who will be very important not just this series but moving forward as well," the skipper said of the Mumbai seamer, who picked up seven wickets and a half-century in the Brisbane Test against Australia earlier this year.

Compared to 2018, when the team lost 1-4 due to a couple of bad sessions, the skipper feels that they are "much better prepared" this time around with two months in England helping them to acclimatise with changes in the weather pattern.

"The players, who were inexperienced in 2018 are now more experienced. Yes, there will be failures but we will have enough players to raise their hands up and be counted in pressure situations."

The key learning from the last series is understanding the art of damage control. "Understanding how to control damage when things are not going your way. Test cricket is all about going through situations and then capitalising when things turn your way.

"It is because you won't have all sessions going your way so when things do not favour you as a team, that's an area we want to keep improving. The Test matches where we have done that, we have ended up winning.

"It all boils down to execution in those difficult moments." One question that certainly didn't amuse him was how he would tackle the wily old James Anderson.

Asked if he has any special plans for Anderson and also on bettering his personal record of the 2018 series, the answer was a terse "No".