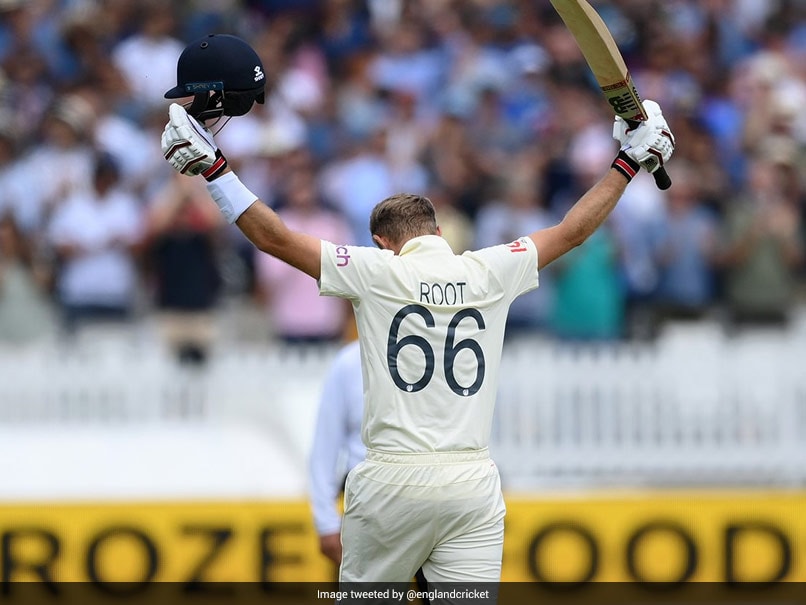 England captain Joe Root's commanding 180 not out, his second successive Test hundred and fifth this year, guided the hosts into a slender first-innings lead against India at Lord's on Saturday. Root's near nine-hour innings in the second Test was the cornerstone of England's 391 -- 27 runs ahead of India's first-innings 364. He faced 321 balls, with 18 fours before James Anderson was bowled by Mohammed Shami off the last ball of the third day's play. Root had been the only England batsman to pass fifty in the rain-marred drawn first Test of this five-match series at Trent Bridge last week with innings of 64 and 109.

On Saturday, however, he was ably assisted in a fourth-wicket partnership of 121 by Jonny Bairstow until his Yorkshire team-mate gave his innings away on 57.

England resumed on 119-3, a deficit of 245, and were again left looking to Root, 48 not out overnight, after opener Rory Burns had fallen for a well-made 49.

At 23-2, Root had walked into bat with England having lost their second wicket before reaching 50 for the 15th time in 19 Test innings this year.

Mohammed Siraj had done the damage, removing Dom Sibley and Haseeb Hameed, out for a first-ball nought, with successive deliveries on his way to 4-94 in 30 overs.

Root, however, square-drove Siraj for a stylish four on Saturday to complete an 82-ball fifty

Bairstow, who started the day on six not out, struck commanding straight-driven fours off Mohammed Shami and Siraj en route to a 90-ball fifty.

England were 216-3 at lunch, having not lost a wicket in the morning session, with Root 89 not out and Bairstow unbeaten on 51.

But just before the advent of the new ball, Bairstow carelessly fell into an obvious hooking trap when, finally tempted by one of several short-pitched deliveries from Siraj, he gloved a pull to India captain Virat Kohli in the slips.

But Root's quick single off Jasprit Bumrah saw him to a hundred, his fourth in Tests at Lord's, off 200 balls with nine fours.

This was Root's fifth Test century this year, with scores of 228 and 186 in Sri Lanka and 218 against India in Chennai preceding last week's effort in Nottingham.

It was an all the more creditable innings given the ongoing strains imposed by Covid-19, with Root having to cope with the absence of all-rounder Ben Stokes, due to mental health issues, and fast bowler Jofra Archer, ruled out for the year with an elbow injury.

After No 11 Anderson was hit on the helmet by a Bumrah bouncer during an over featuring four no-balls, Root hit two successive fours off Siraj -- an audacious reverse ramp over the cordon followed by a slog past deep square leg.

On a placid pitch and a sunny day ideal for batting, the 30-year-old Root, who in the course of this innings became only the second England batsman, after Cook, to pass 9,000 Test runs, was equally comfortable against the left-arm spin of Ravindra Jadeja.

India could have recalled off-spinner Ravichandran Ashwin in place of the injured Shardul Thakur but opted instead to stick with what Kohli called the right "template" of four quicks for English conditions by bringing back Ishant.

Their total was built on KL Rahul's 129 and fellow opener Rohit's 83, with England great Anderson taking 5-62.

Ishant Sharma Cricket
Get the latest updates on ICC T20 Worldcup 2022, check out the Schedule and Live Score. Like us on Facebook or follow us on Twitter for more sports updates. You can also download the NDTV Cricket app for Android or iOS.