India were bowled out for a meagre 107 in their first innings with England pacer James Anderson taking his sixth five-wicket haul at Lord's. 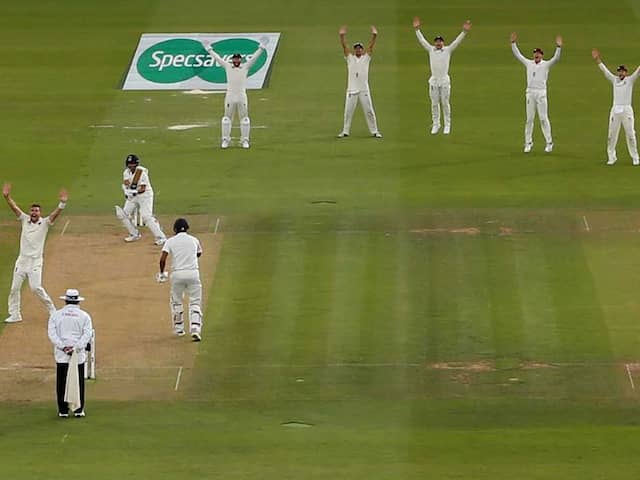 The Indian batsmen suffered heavily against the English pacers in their first innings of the second Test at Lord's. India were rolled over for a paltry 107 as the swing of James Anderson and Chris Woakes wreaked havoc. India captain Virat Kohli, who was prolific in the first Test, too struggled against the moving ball and could not stop the Indian batting from suffering a shocking collapse. Kohli along with his deputy Ajinkya Rahane battled hard but Woakes and Anderson were just too good on the day. Ravichandran Ashwin was the other bright spot on a gloomy day for the Indians, top scoring with a gritty 29. However, the other batsmen fell like ninepins and showed little or no resistance to the English pace battery. Following the disastrous outing on Day 2, some Indian fans were left fuming and trained their guns on a few under-performing players. Rohit Sharma, however, hit back, asking for support from the fans "when the going gets tough".

Defensive batting & slip catching are two skills that are hardly needed in T20 & 50 overs cricket. Those are the two skills that have really deteriorated today. We are all products of our environment as they say.

Time to take a call among a few others on Hardik Pandya. He could prove us wrong but at the moment he does not seem to have it in him to play Test Cricket overseas esp. outside Asia. #ENGvIND

#INDvENG#ENGvIND
Given the pathetic state of #Indian batsmen @BCCI can think of making changes 4 d 3rd test. Try requesting Tendulkar & Gavaskar to come out of retirement

Hardik Pandya is a surprise package of Indian cricket team. He seems like a bowler when he is batting and batsman when he is bowling.

I've lost my faith in Humanity.
How does Hardik Pandya makes it to the playing XI always#ENGvIND

When Hardik Pandya is called your country's best all rounder. pic.twitter.com/6HgDNnb4bH

Rohit reminded the fans that these were the same players that got India the No.1 Test ranking.

Let's not forget these are the players who got India to the number 1 ranking. How about being little supportive when the going gets tough. This is our team

Bollywood superstar Amitabh Bachchan backed Rohit but the same could not be said for some of the other Twitter users who claimed that the Indian team reached the top in Tests by doing well only in home conditions.

Lets not forget that these players (included you) have always Failed in the Away Test Series...

And, the credit of number one rank goes to our Home Pitches....

Lol... Becomes no 1 by playing 1 year at home...
A team gets no 1 status when it wins outside the home, away from its comfortable zone...

Yeah.....Lets give some time...untill AUSTRALIA series. ..when we lost all three overseas tours then we will criticise them and then they will won in home again. ...happy ending! #ENGvIND

Its not about support..we always supports team India..but its our desire as fans to see you people succeed in overseas condition..!

But we have become number 1 by playing at home . Don't these guys desire to win overseas ? Will we always win at home only ...? Missing Ganguly era

The Indian team has won just one match out of the five with the sole victory coming in the 3rd Test and final Test against South Africa at Johannesburg. India had lost the first two Tests of the 3-match Test series.

In that span, India also played a Test against the West Indies (4th Test of the series) that ended in a draw at Port of Spain.

A look back at India's performance outside of Asia in the past five years, makes for an even more dismal reading. From August 11 2013 to August 11 2018, India have played a total of 21 Tests outside of the subcontinent -- again discounting the ongoing Lord's Test. They have managed to win just four of those, drawn seven and lost 10.

During the five-year period, India have lost two Tests in four outings in Australia, lost four times in six Tests in England, lost once in two Tests in New Zealand and lost thrice in five Tests in South Africa.

Overall, India have played a total of 25 Tests in the past two years (discounting ongoing Lord's Test), winning an impressive 16 Tests, 5 drawn and losing just four. Out of the 25 Tests, India have played 17 Tests at home, winning 12 of those and losing just one with four ending in draws. In the two-year span, India also played 3 Tests in Sri Lanka, whitewashing the hosts 3-0 in the 2017 series.

So in total, India have played a total of 20 Tests in Asia out of the 25 overall in the last two years, winning 15 of them.

James Anderson Hardik Pandya England vs India, 2018 England vs India, 2nd Test Cricket
Get the latest Cricket news, check out the India cricket schedule, Cricket live score . Like us on Facebook or follow us on Twitter for more sports updates. You can also download the NDTV Cricket app for Android or iOS.